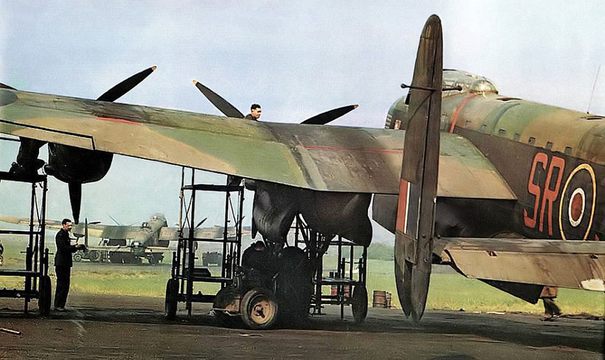 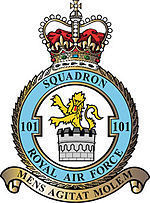 For the purpose of this website, 101 Squadron is included as one of the RAF Squadrons to which Australians were posted during WW II.

Extract from the UK RAF web page for this unit.  See the associated link.

During May and June 1941, No 101 Squadron converted to Wellingtons and in September it paid its first visit to Italy and successfully bombed Turin. In May and June 1942, it took part in the celebrated 1,000-bomber raids on Cologne, Essen and Bremen; on each occasion all its aircraft returned safely. In October 1942, the squadron got its first four-engined aircraft - Lancasters - and before the year ended paid four more return visits to Turin. In the New Year it added Milan and Spezia to its Italian targets in between supporting the ever-growing offensive on German industrial targets and minelaying. On the night of 17/18th August 1943, 20 of the squadron's Lancasters took part in the epic raid on Peenemunde and, despite a lively night-fighter defence, all the aircraft got back. A fresh task fell to the squadron on 7/8th October 1943, when for the first time it used the Airborne Cigar, or ABC, operationally. This apparatus, which searched out and then jammed enemy radio frequencies, was vital to the "Battle of the Ether", and a specially-trained German-speaking operator accompanied the crew. The special Lancasters - they were readily distinguishable from normal aircraft by their two large dorsal masts - carried a normal bomb load less the weight of the operator and the ABC apparatus.

In late April 1945, came the last of No 101's offensive missions during World War 2 - an attack on Berchtesgaden.

Just over a month before this operation, on 23rd March, the squadron was unfortunate enough to lose a most distinguished aircraft-Lancaster Ill DV245 "S-Sugar" (or The Saint as it was named), a veteran of 118 operational sorties. It was shot down by enemy fighters during its 119th sortie, a daylight raid against Bremen. Gloom spread over Ludford Magna - the airfield at which No 101 was then based - when it became known that The Saint would not be coming back.

101 Squadron is one of the most distinguished RAF Squadrons in its history. Its Battle Honours reflect its prodigious record of service.

101 Squadron is one of the most distinguished RAF Squadrons in its history. Its Battle Honours reflect its prodigious record of service.