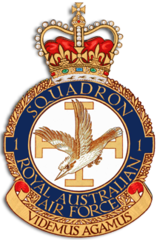 1 Squadron RAAF  Videmus Agamus ("We see and we strike")

1 Squadron RAAF was the successor to 1 Squadron AFC which operated in the Middle East during WW1.  After the War ended in 1919,  the Squadron was disbanded but following the raising of the RAAF in 1921, 1 Squadron was 'back on the books' but was not formally established until 1925 when it became a squadron of the fledgling permanent Air Force.

By December 1941 it was equipped with Lockheed Hudson patrol bombers based in Malaya.  Whilst stationed at RAF Kota Bharu, near the Malaya-Thailand border and two days before the Japanese attack on Malaya, the RAAF Hudsons spotted the Japanese invasion fleet but, given uncertainty about their destination, were instructed to avoid offensive operations until attacks were made against friendly territory. Shortly after midnight, local time, on the night of 7/8 December 1941, the Japanese force started landing on the beaches at Kota Bharu, close to the airfield.

From about 02:00, No. 1 Squadron launched a series of assaults on the Japanese forces, becoming the first aircraft to make an attack in the Pacific War. The Hudsons sank a Japanese transport ship and damaged two others for the loss of two Hudsons, an hour before the attack on Pearl Harbour. Flt Lt Donald Dowie, from Adelaide, was the co-pilot in one of the downed Hudsons. He was the sole survivor of the crash landing into the sea and was picked up by the Japanese some 2 nights after and became a prisoner of war and imprisoned in Changi, Singapore, and later was put to work on the Burma railway. He was returned to Changi where he survived the rest of the war. He was the first POW of the Japanese-Malayan Campaign. (thanks to Ian "Moose" Gully)

No 1 Squadron was severly mauled during the Japanese invasion and subsequently withdrew to Australia;  many of its personnel including the CO became PoW of whom more than half perished in captivity.

1 Squadron persists to this day and since being re-raised in 1948 has successively operated Avro Lincoln heavy bombers, English Electric Canberra jet bombers, McDonnell-Douglas F4 Phantom and for 37 years until 2010 the General Dynamics F111 supersonic strike bomber.  It re-equipped with General Dynamics Super Hornets and in 2014 it deployed on operations to the Middle East.  A separate entry will be raised for post WW2 service in due course.

1 Squadron together with 2,6,7,8,13,14,15,32 and 100  squadrons are commemorated on Plaque 3 at the RAAF Memorials complex in Adelaide, because they all operated the rugged Bristol Beaufort light bomber in the SW Pacific later in the war.  A similar memorial exists in Brisbane

This page a work in progress....like to contribute?   contact admin@rslvirtualwarmemorial.org.au