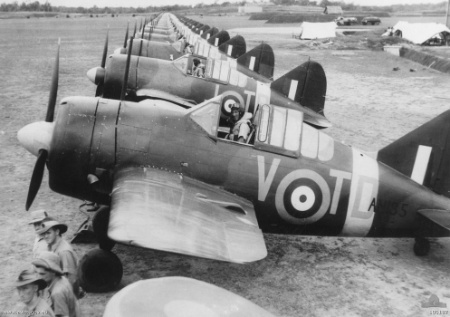 No. 453 Squadron, as its '400' series designation indicates, was an Article XV Squadron raised under the Empire Air Training Scheme.

It was equipped with the US made Brewster Buffalo radial engine single seat fighter, and deployed to the Malay Peninsula in support of the 8th Division,  When the Japanese landed at Khota Baru on the 8th December 1941, 453 was simply not able to compete.  The Brewster Buffalo was totally outclassed by the Mitsubishi A62 better known as the Zero.  453 Squadron was decimated.

Like the rest of the Allied force in Malaya, it was forced into a state of perpetual retreat, made worse by the inability of the outclassed Buffaloes to compete with the marauding Japanese Zeros and Oscar fighters.

Running out of aircraft, spares and people, the squadron was merged with the British 21 Squadron as Allied fortunes in Malaya and Singapore flagged. They were lucky to get out of Singapore, unlike the bulk of deployed Allied forces, who went into captivity.  453 Squadron was disbanded in Adelaide in March 1942.

It was subsequently reformed in Britain, from June 1942, as a completely new organisation with a different role and with infinitely better aircraft when it was equipped with the legendary Supermarine Spitfire Mk Vb.  453 Squadron was initially formed within RAF Fighter Command conducting defensive Combat Air Patrols over the UK and offensive low level fighter sweeps (known as "Rhubarbs") over Western Europe shooting up and bombing German rail operations, vehicles, facilities and troop concentrations.  These tasks were quite dangerous because of the threat from German light flak anti aircraft artillery.   They conducted some bomber escort duties but the Spitfire lacked the range and endurance of the US fighters so these tasks were generally closer to home in northern France.  453 later became part of the 2nd Tactical Air Force over NW Europe after the invasion of Normandy.

It accumulated 28 1/2 enemy aircraft credited as destroyed, a further 10 probable and 29 damaged.