No. 214 Squadron (RAF) Bomber Command - RAF Ultor in Umbris - "Avenging in the Shadows" 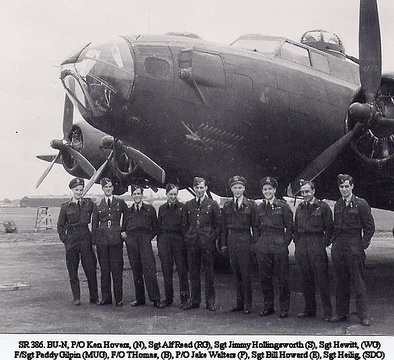 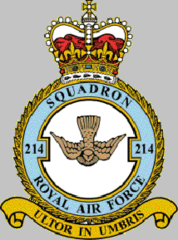 For the purpose of his website, 214 Squadron is included as one of the RAF Squadrons to which Australians were posted during WW II.

The squadron was originally formed at Coudekerque, near Dunkirk, on 28th July 1917, as a No 7A Royal Naval Air Service Squadron, heavy night bomber.  It was renumbered and on 1 April 1918 it was absorbed into the RAF. Equipped with Handley Page 0/400 twin-engined bombers, mainly engaged in night attacks against naval and army targets in Belgium, but also bombed targets in France.

214 squadron was next resurected in 1935 at Boscombe Down as a bomber squadron again.  It began conversion to Vickers Wellington I medium bombers in May 1939.  214 squadron officially entered the war on June 14, 1940 flying Wellingtons; the first raid was a fire raising attack on German forests by 2 Wellingtons on 14/15 June 1940.

For the most part of the Second World War the squadron served in No. 3 Group and over this period flew some of the bloodiest missions of the war against naval, industrial and other targets in Europe. Many never returned. No. 214 provided completely unbroken service throughout the war in Bomber command (though not on Ops for first nine months) and had the highest percentage of losses of 3 Group. It also played an active role in Gardening or minelaying operations.

In Oct 1942 the Squadron moved to Chedburgh then on to Downham Market in Dec 1943, continuing with Stirlings until January 1944 when its tour of duty with No. 3 Group ended.

It re-purposed as a specialist Electronic Warfare squadron and was re-assigned to 100 Group, flying specially modified Boeing B-17 Flying Fortresses, one of only a handful of RAF units to operate this aircraft.  Here it was engaged in Electronic Warfare (EW) and Electronic Counter Measures (ECM) such as detection and jamming of enemy radio and radar equipment, until May of 1945.  This was extremely hazardous as the equipment was 'active' and thus trackable by enemy detection devices.

The squadron reformed in various guises after the war.

See the website link for details of personnel and aircraft losses.