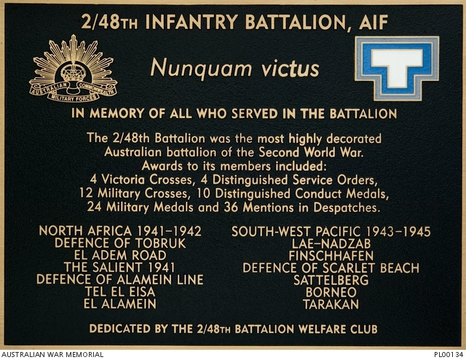 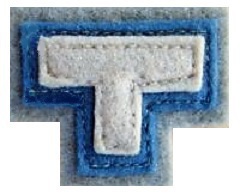 The 2nd/48th forged its reputation as the most decorated Battalion in the 2nd AIF eclipsing even the 10th Battalion of WW1, with no less than four Victoria Cross recipients.

The 2nd/48th Infantry Battalion was Australia's highest decorated unit of the Second World War, awarded four Victoria Crosses (three of them posthumously) and more than 80 other decorations.

The battalion was raised at the Wayville Showgrounds in Adelaide in August 1940. It was part of the 26th Brigade, with the 2nd/23rd and 2nd/24th Battalions. The brigade was initially part of the 7th Division but in early 1941 was transferred to became part of the 9th Division. The 2nd/48th did its initial training at Woodside, before sailing to the Middle East in November.

In early 1941 the 26th Brigade, along with the rest of the 9th Division, moved into Cyrenica to complete its training. Despite the successes of the British offensive at the start of the year, the 9th Division fell back to the Tobruk fortress after the German-led counter-attack. The 2nd/48th entered Tobruk's defences on 9 April, with the 9th Division forming the bulk of the garrison tasked to hold the "fortress" for the next three months.  Eight months later they were still there.

On Easter Monday 14 April the 2nd/48th helped defeat the Axis assault on Tobruk, while manning part of the Red Line with the 26th Brigade. The Red Line was the outer line of Tobruk's defences and consisted of series of concrete pillboxes forming a semicircle around the town. Between 15 and 16 April patrols from the 2nd/48th captured nearly 800 officers and men - virtually the entire 1st Battalion of the Italian 62nd Trento Regiment.

In October the 9th division, except the 2nd/13th Infantry Battalion, was withdrawn from Tobruk and sent to Palestine and Syria for rest and garrison duties. By July 1942 German and Italian forces had reached El Alamein in Egypt, about seventy miles from Alexandria. The war in North Africa had become critical for the British Eighth Army. The 9th Division was consequently rushed from Syria to the Alamein area and held the northern sector for almost four months, as the Eighth Army was reinforced for an offensive under new a commander.

The 9th Division's orders for the fist main attack were issued on 7 July. The 26th Brigade would advance along the coast and capture the feature known as "Tel el Eise", running north-west between the railway line and the sea. This would create a wedge between the Germans and the sea.

Attacking just before dawn on 10 July, the 2nd/48th took its first objectives and captured about 400 prisoners. Tel el Eisa was captured the following morning. It was for his part in the bitter fighting in this area on 22 July that Private Arthur Stanley Gurney was awarded a posthumous VC. When his company came under enemy machine-gun fire, Gurney went ahead to capture the post and bayoneted the gun crew. He also captured a second post but was killed while trying to take a third.

The battalion's second VC was also awarded posthumously, this time during the main offensive in October. It was awarded to Sergeant William "Bill" Henry Kibby for his series of "heroic actions" dating from the initial attack on 23 October to the night of 30 October. On that night Kibby's platoon had been destroyed by fire from a machine-gun post. Kibby moved forward, throwing grenades in an attempt to destroy the position, but was killed.

Several nights earlier on 25 October, Private Percival "Percy" Eric Gratwick was killed in a similar attack in the same area. Gratwick's platoon commander, sergeant, and many others in the platoon had been hit or killed by enemy fire. The platoon was reduced to just seven men, so Gratwick, acting on his own initiative, charged the nearest enemy position, destroyed it with grenades, and killed the occupants. He attacked another position where he was killed. Gratwick was awarded the 2nd/48th's third VC.

Alamein was a great, although bloody, success for the Allies and by 6 November Axis forces were retreating. But the 9th Division was needed elsewhere and with the battle over it was time for it to return to Australia and fight a new enemy - the Japanese. The 2nd/48th left Alamein on 3 December and headed back to Gaza in Palestine, where it participated in the 9th divisional parade on 22 December. The battalion left Palestine in the third week of January 1943 and, sailing with the rest of the division, reached Sydney at the end of February.

Reorganised for jungle operations, on 4 September the 2nd/48th participated in the division's amphibious landing at Red Beach, north-west of Lae, and fought in the battles around Lae, Finschhafen, and Sattelberg. It was for his actions at Sattelberg, that Sergent Thomas "Diver" Currie Derrick was awarded the battalion's fourth VC.

On 22 November the 2nd/48th and tanks had reached the southern slopes of Sattelberg feature. Here the Japanese were entrenched but after two days the battalion's patrols were probing forward. Derrick, who had already received a Distinguished Conduct Medal at Alemein, led his patrol forward. He personally captured ten Japanese positions, allowing the rest of the battalion to take Sattelberg the next day.

After fighting in New Guinea, the battalion returned to Australia in February 1944. After some leave, the 2nd/48th reformed in Queensland in June at Ravenshoe on the Atherton Tablelands, for what proved to be an extensive training period. Indeed, the war was almost over before the battalion went into action again.

In April 1945 the 9th Division was transported to Morotai. Morotai was used as a staging in area before the 7th and 9th Divisions made their amphibious landings on Borneo as part of the OBOE operations. The 26th Brigade landed on Tarakan on 1 May. The two lead battalions were the 2nd/48th and the 2nd/23rd, with the 2nd/24th in reserve. After a massive pre-invasion air and naval bombardment, there was no opposition on the beaches. However, sharp Japanese fire came from Lingkas Hill. The two battalions pushed inland towards the Tarakan township, overcoming Japanese resistance as they went and by that night had established a beachhead 2.5 km wide and 2 km deep. Almost all objectives had been taken but tougher fighting was still to come.

From 6 May to 16 June the mountain ridges behind the town were the scene of bitter fighting. In this area of tangled hills and jungle-covered ridges, the Japanese used mines, booby traps, and suicide raids to delay the Australian advance. The 2/48th was involved in the bitter fighting to capture Sykes and Freda features. It was at Freda, on 23 May, where Derrick was mortally wounded while commanding his platoon.

In the meantime, the 2nd/24th had captured the Australians' last main objective, Hill 90, and the fighting on Tarakan was all but over. The island was divided into areas given to each unit to clear of any remaining Japanese survivors. The 2nd/48th's sector was on the island's east coast Pamusian in the south, the town, and an area in the island's centre, which it garrisoned with some Dutch troops.

Following Japan surrendered and the end of the war in August, the ranks of the 2nd/48th thinned, as men were discharged, transferred, or volunteered for occupation force for Japan. While still on Tarakan, the 2nd/48th Battalion was disbanded on 25 October.