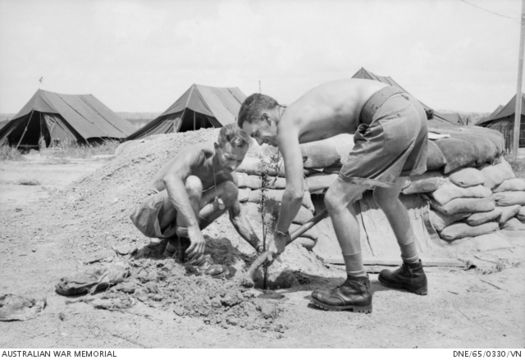 Personnel for these units were drawn from the AIF , then demobilising across what was at that time the Dutch East Indies., Papua and New Guinea.  On 12 October 1945 the 65th Battalion was raised from the 7th Division at Balikpapan and quickly sailed to Morotai from where they undertook training prior to being sent to Japan.  The other two Battalions were raised from those of the 6th and 9th Divisions.

By the middle of June 1946 the Australian brigade was in place, with the 65th Battalion located in the Fukuyama–Onomichi region near the Kure Naval Base 150 kilometres (93 mi) south of Osaka. The battalion was charged with enforcing the directives of the Supreme Commander for the Allied Powers, which involved various tasks such as ceremonial duties, escorting displaced persons, restoring law and order and overseeing the disarmament process.[

During this time they participated in the search and destruction of wartime materials.  The operation was not without risk as the area was honeycombed with caves and tunnels and large quantities of explosives, ammunition and poison gas were found.

1 RAR was initially settled in at Ingleburn, but later moved to Enoggera and Holsworthy and has been based at Lavarack Barracks, Townsville since 1971.

1RAR was back in Australia when the Korean War began in 1950.  In 1951, 1RAR was brought up to strength with volunteers from 2RAR and new enlistments from the 'K' Force recruiting campaign which attracted a large number of men with experience from World War II into 1 RAR and 3RAR.  In September 1951 the battalion received orders to move to Korea and after a farewell march through Sydney 1RAR departed for Japan on 18 March 1952.   After a period of training in Japan, 1RAR arrived in South Korea on 6 April 1952, joining the Commonwealth 28th Brigade on 1 June. On 19 June 1952 1 RAR moved into the line.

In July 1952 1RAR was detached to the 29th Brigade, relieving other battalions on Hills 159, 210 and 355.  It took part in general patrolling along the Jamestown Line, which involved securing defences, repairing minefield fences, and undertaking reconnaissance of enemy positions to gather information on them.  Other major operations that 1RAR took part in usually aimed at capturing a prisoner or destroying enemy defences. Operation Blaze was 1RAR's first major action, which involved an attack on Hill 227 in order to capture a prisoner.  The attack failed in its objective and the battalion suffered four killed and 33 wounded in action.

On the night of 13–14 September the battalion captured its first prisoner as it continued to conduct patrolling operations. 1RAR relieved the 1st Battalion, Royal Canadian Regiment on Hill 355 in November 1952.   1 RAR had to regain control of the approaches and re-establish security in the area, suffering 50 casualties in the process.

On the night of 11–12 December 1952 1RAR was involved in Operation Fauna, which was only a partial success as the Australians failed to capture a prisoner, although they did manage to destroy an enemy position.  The battalion suffered 22 wounded and three missing as a result of this action. Operation Fauna was 1RAR's last action of the war and they were relieved by 3RAR on 29 December 1952.  On 21 March 1953, 1RAR was relieved by 2RAR at Camp Casey, near Tongduchon, and returned to Australia later that month.

In April 1954, 1RAR returned to Korea as part of the UN forces stationed in the country after the armistice.  It remained there until March 1956.

The Malayan Communist Party's began an insurrection to convert Malaya into a Communist state in 1948 and in response to increasing civil unrest the British Commonwealth Far East Strategic Reserve was established, with Australia contributing a battalion group on rotation.   On 20 September 1959, 1RAR embarked  for Malaya.  After arriving at Singapore the battalion trained at Kota Tinggi and moved to base camps at Kuala Kangsar, Sungei Siput, Lasah, Lintang and Grik. The battalion began Operation Bamboo on 16 November 1959 in the Thai/Malay border area in Perak, relieving the 1st Battalion, The Loyal Regiment.  For the next 18 months 1RAR operated in 210 square miles (540 km2) area of dense jungle searching for the elusive Communist terrorists (CTs), led by the even more elusive Ching Pen.

The area was largely inaccessible except by helicopter, boat or on foot. Platoon sized patrols would be sent for three week long search operations before returning to the base camps for ten days rest. Even though there were 117 official 'finds' during these operations, no kills were recorded by the battalion at this time as the CTs began to counter the Australian patrols by crossing the border into Thailand where they could not be followed.  In April 1960 1RAR took part in Operation Magnet, which involved Far East Strategic Reserve (FESR) units crossing the border into Thailand for the first time in the conflict in an attempt to drive the CTs back into Malaya where other units were ready to carry out ambushes upon them.  Later in June, Operation Jackforce was launched, using similar tactics and during this 1RAR finally was involved in one contact.

In July 1960, the Malayan Emergency was officially declared over.  1RAR remained on operations until the following year when it was withdrawn and began a period of intensive training as part of the FESR.  On 29 October 1961, t1RAR left Penang for Sydney, having suffered two men killed in action.

Although not deployed during the period of 'Konfrontasi' with Indonesia when Malaysia was formed, 1 RAR returned to Malaysia in early 1969.  In December 1969 1RAR joined the Selarang garrison in Singapore until July 1971 when it returned to Lavarack Barracks in Townsville.