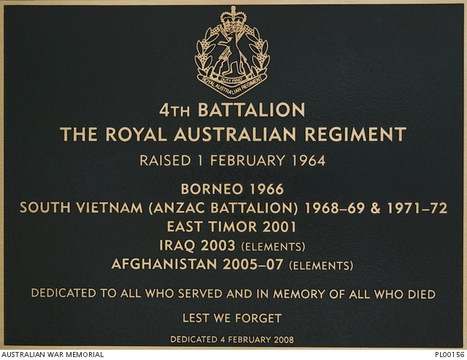 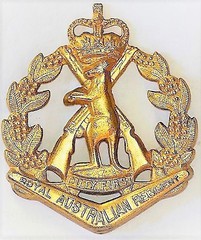 Current Location: No longer manned. But remains on the Orbat.

Colours and Regimental Property: Held in trust at the School of Infantry.

4RAR had first been established in 1952 as a "Training Depot" unit to complete Infantry Corps Training for troops assigned to the Battalions of the Royal Australian Regiment.  It was not a complete Battalion, comprising just two companies, based at the School of Infantry then located at Ingleburn in New South Wales.

In 1963, Australia's operational commitments in SE Asia began to intensify with commitments to Vietnam and then the outbreak of hostilities with Indonesia during "Konfrontasi" over the formation of the State  of Malaysia.  It was decided to formally constitute a fourth regular Battalion.  This was duly carried out in 1 February 1964 at Woodside in South Australia.

Shortly thereafter 4 RAR was allocated to the Far East Strategic Reserve in Malaysia.

4RAR deployed to Malaysia in September 1965 for a two year tour of duty accompanied by their families, replacing 3RAR as the Australian Infantry Battalion in the British Commonwealth Far East Strategic Reserve (BCFESR), located in Terendak, Malacca. The Battalion took part in exercises for its Strategic Reserve role as well as conducting security operations to defend against possible Indonesian incursions.

In April 1966 the Battalion deployed to Sarawak in Malaysian Borneo. Its area of operations was based on that of 3RAR in 1965, although it was somewhat larger.

Peace talks between Malaysia and Indonesia were under way, but Top Secret (CLARET) operations continued although, so as not to jeopardise the talks, they were limited to surveillance with contact to be avoided if possible. Artillery support across the border was not generally available and there was no air support. However, all 4RAR rifle platoons undertook a CLARET operation, some penetrating deep into Indonesian territory.

Patrolling continued within Sarawak to detect and destroy Indonesian infiltrators. Field and Medium Artillery were available for these patrols. In June 1966 a major Indonesian incursion occurred into 4RAR’s area of operations. 4RAR, reinforced by a company of 2/7th Gurkha Rifles and an Australian SAS Troop, successfully eliminated the infiltrators.

On 11 August 1966 a Peace Accord between Malaysia and Indonesia was signed, bringing an end to hostilities. 4RAR returned to Terendak in September and resumed its BCFESR role, being replaced by 8RAR in October 1967 and returning to Brisbane to prepare for service in Vietnam in mid - 1968.

The short period of time until deploying to Vietnam provided a major challenge as leave had to be taken as well as a comprehensive training and testing program completed. A restructure was required as well to accommodate two NZ companies, ceating a composite ANZAC Battalion, which led to the disbanding of A Company. Nevertheless the Battalion was ready to deploy as ordered and contained many members who had been with the Battalion since 1964.

4RAR/NZ (ANZAC) replaced 2RAR /NZ in June 1968. A second New Zealand Rifle Company from 1RNZIR had joined V Company, to be known as “Whiskey” (W) Company. The Battalion provided one rifle company on rotation to the Horseshoe base.

The Battalion commenced patrolling immediately on arrival and with the rest of the Task Force concentrated on the Hat Dich, Rung Sat and the three province northern  border area as it contained major enemy bases.

The allied operational emphasis was designed to keep the enemy off balance by concentrating on their base areas which were mainly in the north of the province. There were repeated search and destroy operations mounted throughout the wet season in an attempt to interrupt their operations. There were moderate results as the bases were only occupied periodically.

On 24 June, the Battalion was deployed to Fire Support Base (FSB) Concord, near Bien Hoa and subsequently to the other northern areas of the Hat Dich, Rung Sat and the three province border area. The Battalion was also deployed three times to the Long Binh Bien Hoa area during periods of major enemy activity.

In December the Battalion deployed to FSB Sandpiper on Operation Goodwood, which was unusual in that the companies were limited to patrolling 5000 metres from the FSB. The reason for this was that the whole battalion was designated as the corps reserve for a projected major operation in the Tay Ninh area and needed to be capable of deploying quickly. This did not eventuate and the Battalion returned to the Hat Dich, occupying FSB Wattle until February 1969.

On 16 February, in the Rung Sat area, B Company plus a troop of tanks encountered an enemy Regimental Headquarters which was protected by a battalion. A fierce battle ensued but the engagement had to be broken off at 1700 hours due to the commencement of the Tet (Buddhist New Year) truce.

Operation Goodwood lasted 78 days, and was the longest period away from Nui Dat by any Australian unit. While there were few major actions, the enemy suffered heavy casualties and were forced to abandon their bases in the Hat Dich area. Their plans for a Tet offensive were also disrupted.

Later in February the Battalion plus the majority of the Task Force was deployed back to the rocket belt on Operation Federal in the Long Binh- Bien Hoa area in anticipation of an offensive. On 23 February, 525 NVA Engineer Battalion encountered W Company on the way to attack Long Bien. In the ensuing battle the NVA suffered heavy losses when they attacked the dug in Kiwi company. The Battalion returned to Nui Dat on 24 March having been deployed since 11 December.

On 13 May following an enemy attack on the US 11th Armoured Cavalry Regiment’s base at Blackhorse, while the majority of the Regiment was in Tay Ninh, W Company, which was the 1ATF Ready Reaction Company, deployed to the Courtenay Rubber Estate to assist. Reinforced by a section of 11ACR fighting vehicles, they contacted the 33rd NVA Regiment and a fierce firefight developed lasting into the night when the enemy withdrew. 9 Sqn RAAF provided a Light Fire Team in support of the contact.

The majority of the contacts during the year occurred at platoon level, and while they are too numerous to be recorded herein they were largely successful. In particular they achieved a very high percentage of first shot contacts, adding up to a very impressive tour of duty.

On 21 May 1969 the Battalion handed over to 6 RAR and returned to Australia, arriving on 1 June in Brisbane.

On 2 May 1971, 2RAR was replaced in South Vietnam by 4RAR, which became 4RAR/NZ(ANZAC) Battalion. Local area patrolling and ambushing occupied the first month.

In June the Task Force launched an operation entitled “Overlord” following intelligence indicating that the D445 VC Battalion and the 33rd NVA Regiment were located near the northern border of the province. Both 4RAR/NZ(ANZAC) and 3RAR, which had arrived in February 1971, replacing 7RAR, were involved but the operation yielded only minor contact, although there were indicators of the likelihood of upcoming enemy occupation.

A second operation named “Hermit Park” was mounted immediately into the same area.  This time with considerable success. The headquarters of the 274th Viet Cong Regiment was located and forced to withdraw. In addition a bunker system belonging to the local Chau Duc guerrilla company was destroyed.

Operation “Iron Fox” followed shortly thereafter. 4RAR/NZ (ANZAC) was to push the enemy towards a blocking position occupied by 3RAR. There were several major contacts with the 1st Battalion of the 274th Regiment and the plans of the VC Regiment to establish base areas in the north west of the province were well and truly ruined. Operation North Ward which ran from 5 August to 18 September, was next, yielding numerous contacts and it appeared that there were new enemy units moving through the area, so Operation “Ivanhoe” was mounted on September 19. This was destined to become the major engagement of the Battalion throughout the whole tour.

On 19 September an RF post on Route 2 was attacked along with the village of Ngai Giao. On 20 September a detachment of the 3rd Cavalry Regiment was ambushed. Then on 21 September a 4RAR/NZ (ANZAC) company encountered a defensive position occupied by the second battalion of the 33rd NVA Regiment. Later the same day a second company encountered the 3rd Battalion as well as the Regimental Headquarters.  So there were two battles raging throughout the day into the night, until the enemy withdrew.

The Battalion performed very well indeed during this operation and the fact that the enemy withdrew in both cases was invariably indicative that they were being defeated by the much smaller 4RAR/NZ(ANZAC) companies. This engagement became known as the Battle of Nui Le and was by far the major battle of their deployment and the last major battle of the Vietnam War involving Australian and New Zealand troops.

On 18 August it was announced that the Task Force would cease operations in October and most of the Australian troops would be home by Christmas. However, on the ground operations continued apace.

Nui Dat was finally handed over to a South Vietnamese Regional Force Company on 7 November 1971 and 4RAR returned to Australia, although D Company remained at Vung Tau until 9 February 1972 to provide security and a ready reaction force for the Australian logistics units as they progressively withdrew. There were no major incidents.

In 1995 the Battalion was delinked, with a Company deploying to Rwanda with 2RAR from which the Rwanda Company was detached, remaining in Townsville and 4RAR relocating to Holsworthy as a light infantry battalion.

On 1 February 1997 4RAR was re-roled as a Commando unit and commenced training for its new role. However, it remained within the Royal Australian Regiment.

4RAR (Cdo) was deployed to East Timor in April 2001. It was restructured to the standard light infantry battalion establishment for the task. The main roles were to win the hearts and minds of the East Timorese people and to ensure that the militias were unable to operate. The Battalion was very successful in Dili and was able to deploy to the border area where there were several serious incidents which were well handled partly due to good local relations. Parliamentary elections were scheduled for September 2001.The Battalion deployed to polling booths around the country and provided ready reaction forces in sensitive areas. The effectiveness of these actions ensured that the elections were conducted fairly and 4RAR (Cdo) was replaced by 2RAR in October 2001.

Following further serious internal problems in East Timor, a company of 4RAR (Cdo) was deployed to secure Dili airport on 25 May 2006 and remained with a large peacekeeping force consisting of 3RAR, two companies of 2RAR, one from 1RAR, a re-roled artillery unit, 500 Malaysian troops and a New Zealand Rifle Company. The situation was such that it was likely to require on going

Peace keeping support so the force was replaced by one led by 6RAR commencing in September.

In preparation for the invasion of Iraq, in 2003, 4RAR (Cdo) was directed to support the Australian SAS with a detachment of 40 to protect their Forward Operational Base and provide a reaction force. Troops were also deployed to protect Humanitarian Assistance Teams.

Once Baghdad had been captured by the allies the Commandos were given security tasks for the Australian Embassy until the Australian Security Detachments (SECDET) were up and running.

Following the withdrawal of an SAS Squadron in 2002, Australia agreed to provide a Special Operations Task Group (SOTG) under the banner of Operation Slipper in the province of Uruzgan. Elements of 4RAR(Cdo) were included in each of the three rotations. They were replaced by a Reconstruction Task Force (RTF) which included infantry elements for security.

For an outstanding performance against the enemy from August 2005 until September 2006, 4RAR(Cdo) was awarded the Unit Citation for Gallantry

On 19 June 2009 the Battalion was retitled the 2nd Commando Regiment and left the RAR. 4RAR remains on the Order of Battle although it is not manned. The Colours, including the Unit Citation for Gallantry are held in trust by the School of Infantry against the battalion being re-raised.