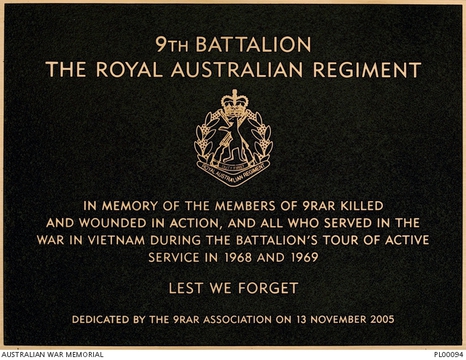 No longer on the Order of Battle.

9RAR was formally raised in Adelaide on 13 November 1967 by its Commanding Officer, Lt Col A. L. Morrison,  MBE, It was based at Woodside South Australia. The formation came from the Government’s decision to increase the number of battalions in the 1st Australian Task Force from two to three.

9RAR was unique in that the Battalion had to be trained, tested and deployed within 12 months. The challenge was to train its National Servicemen, (About 50% of the Battalions troops were National Servicemen direct from basic training at Kapooka or Singleton) and then meld them with the Regular Army troops into effective fighting units. This task was successful by much hard work.

9RAR deployed to South Vietnam 0n 20 November 1968 to the 1st Australian Task Force base at Nui Dat in Phuoc Tuy Province, replacing 3RAR. The Battalion’s first contact occurred during a successful cordon and search operation of the village of An Nhut located to the south of Nui Dat.

By early in 1969 there were indications that there would be another Tet offensive, as there had been a great deal of movement of enemy units towards the end 1968. The Task Force was directed to deploy to the Hat Dich area to engage the 274th VC Regiment. 9RAR joined the operation named Goodwood on 1 January 1969 and remained deployed until 17 February.  During this period 9RAR had contacts with groups of up to 30 enemy and located many bunker systems. Intelligence indicated that 9RAR had interrupted the move of an enemy regiment and had disrupted their plans.

The Battalion, less B Company which had become the Task Force Reaction Force was then relocated to an area from which they could contribute to the defence of the large American bases of Bien Hoa and Long Khanh and of course Saigon. While this was occurring, a VC force attacked a military compound in Ba Ria the capital of Phuoc Tuy province, requiring the dispatch of B Company to clear them out. This was successful. Meanwhile the enemy, the 5th VC Division, was advancing towards the American bases and Saigon. However, despite extensive patrolling by 9RAR there was little contact and the battalion was relieved in place by 5 RAR.

In early April, by which time 9RAR had been moved to Long Khanh province, the Battalion encountered many bunkers, 4RAR/NZ joined them. The two battalions destroyed many bunkers and a great deal of equipment and supplies.

In mid-April the Task Force received a new operational concept, namely, pacification to reduce the presence of the enemy in the populated areas of Phuoc Tuy, thereby improving the capability of the South Vietnamese forces in the province, Civic Action projects which were beneficial to the people were increased and Search and Destroy operations continued.

In May 9RAR was tasked with providing population security in and around Long Dien and Dat Do, two villages known to be sympathetic to the enemy. This involved patrolling and ambushing on the routes in and out of the villages, particularly those leading to and from the Long Hai Hills. One company was detached to train an ARVN battalion and another to protect an engineer land clearing team. Even though 9RAR was supported by cavalry and tanks these tasks were very challenging.

Nevertheless the operations proved to be successful. For example the ambushes were interspersed with daytime patrolling through populated areas to reinforce the protective presence and deter enemy activity. The ambushes worked because the VC needed supplies from the villages in order to continue to operate and the land clearing denied safe routes into and out of the villages.

These tactics were continued along with training the local South Vietnamese units for the remainder of the year. They were regarded as being most successful. On 29 September, Operation   “Jack” was mounted in the border area between Phuoc Tuy and Bien Hoa provinces. The area was known to contain major enemy bases. The operation was designed to destroy enemy forces in the AO and to protect a US Land Clearing Unit.

There were numerous successful contacts during the operation with enemy groups from five to more than 30 as well as several much larger groups. Many caches of weapons, ammunition, explosives and food were uncovered and  there was evidence that the 33rd NVA Regiment was in occupation until forced to withdraw due to the 9RAR operations. The Battalion returned to Nui Dat on 31 October and Operation “Jack ”  was the last major operation mounted by the Battalion. In November 1969, 8RAR replaced 9RAR which returned to Adelaide South Australia. The Battalion was reformed at Enoggera Queensland in 1970 in preparation for a second tour of Vietnam.

In 1972 the Australian Government decided to withdraw from Vietnam. This decision led to the reduction in the number of RAR battalions and in 1973 8RAR and 9RAR were linked at Enoggera to form 8/9RAR.

The history of 9RAR during this period can be seen in the book “9th Battalion The Royal Australian Regiment- Proud to Serve”.

Today the 9RAR history lives on in the 9RAR Association which provides support to the 9RAR family. Its history books and other memorabilia are available from the Association.