No. 9 Squadron (RAAF) Videmus nec Videmur "To see and not be seen" 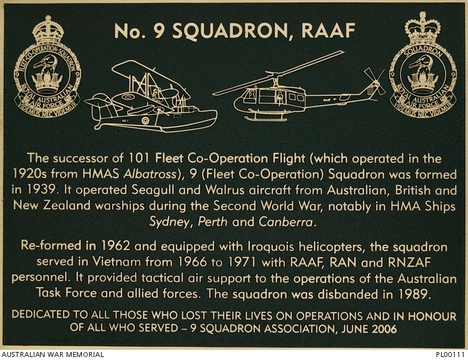 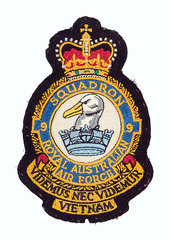 No. 9 Squadron RAAF existed in two principal forms; prior to and during WW2, as a ship-borne maritime reconnaissance squadron, detachments of which were assigned to various Royal Australian Navy warships equipped to launch and recover seapplanes, and in the 1960s through to 1989, as a Utility Helicopter squadron equipped with the ubiqitous UH 1 Iroqois or 'Huey' helicopter which was synonomous with the Vietnam War.

No 9 Squadron was formed in January 1939 at Point Cook, Victoria, from No 5 Fleet Co-operation Squadron. The unit's Supermarine Seagull V amphibious aircraft - commonly referred to as the Walrus - were designed to be embarked on Royal Australian Navy cruisers to provide reconnaissance, anti-submarine and naval gunfire support-spotting for the Navy.

After the declaration of war in September, several Walruses and their crews - embarked with their Australian cruisers - found themselves in the Mediterranean, where they continued serve until early 1942.  HMAS Australia's Walrus was lost off Dakar on 23 September 1940 when it was shot down by Vichy French Curtiss Hawk fighters while spotting Naval Gunfire for the Royal Navy raid aimed at preventing the ships falling into the hands of Nazi Germany.

With the entry of Japan into the war in December 1941, the Australian cruisers returned to the Pacific theatre to play a direct role in the defence of Australia.

During the war, No 9 Squadron personnel invariably suffered the same fate as the ships in which they were embarked. In a night action off Guadalcanal on 8 August 1942, five squadron personnel were killed and a further two wounded when HMAS Canberra was sunk. Similarly, when HMAS Sydney was lost with all hands in an action on 19 November 1941, six squadron members were among those killed. Another five personnel died on 1 March 1942 when HMAS Perth was sunk in the Sunda Strait.

The squadron disbanded at the RAAF flyingboat training base at Rathmines in NSW in 1944, after the catapults were removed from all of the Australian cruisers.

In 1962 the squadron was reformed and was based at Fairbairn air base, outside Canberra. 9 Squadron was one of the RAAF's two helicopter squadrons. The other, 5 Squadron, had been serving in Malaysia since 1964, as part of the Far East Strategic Reserve at Butterworth. When it was announced in March 1966 that a helicopter squadron would be sent to Vietnam, it was assumed a separate flight would be created, as had happened with the Caribou's of RAAF Transport Flight Vietnam. However, it was later announced that 9 Squadron would go to Vietnam as a whole unit and 5 Squadron would return to Australia. A period of reorganisation at Fairbairn followed.

On 6 June 1966 eight Iroquois helicopters from 9 Squadron, Royal Australian Air Force (RAAF), landed at the Vung Tau airbase, Vietnam. The Bell UH-1B Iroquois or "Huey" is almost synonymous with the Vietnam War and for the next five and a half years 9 Squadron's Hueys supported the 1st Australian Task Force (1ATF). Based at Vung Tau, the squadron's role was to support 1ATF by transporting troops and resupplying units in the field with ammunition, water, and food. When the road from Vung Tau to 1ATF base at Nui Dat was cut or threatened by the Viet Cong (VC), the squadron worked with 35 Squadron in resupplying the base.

9 Squadron achieved a high reputation and worked closely with the army. However in the first few months of its deployment there was some tension between the squadron and the army due to the air force not meeting the army's expectations. The squadron's helicopters did not have armour and crews were not issued with flak jackets (which had to be "scrounged" from the Americans). Relations improved after the Battle of Long Tan in August, when two of the squadron's helicopters flew through heavy rain at treetop height to deliver ammunition to the Australian troops.

In 1968 the squadron's size was increased to 16 Iroquois helicopters. Four of the squadron's Iroquois were subsequently modified into gunships, which carried twin-fixed forward-firing 7.62-millimetre mini-guns and two seven-tube 2.75 inch rock launchers, in addition to the two door-mounted M60 machine-guns. These "Bushranger" gunship were able to cover troop-carrying helicopters approaching "hot" landing zones and provide fire support.

9 Squadron flew its last mission in Vietnam on 19 November 1971. In December the squadron's 16 Iroquois took off from Vung Tau for the last time and landed on the deck of the Sydney for the return trip back to Australia.

After its return from Vietnam 9 Squadromn continued in a primary role of providing Utility Helicopter support to the Army.

In early 1982, eight Iroquois and a contingent of personnel deployed to the Middle East on peace-keeping duties as part of the Multi-National Force and Observers - a commitment which was maintained until 1986.

In February 1988, No 9 Squadron began to re-equip with S-70A Black Hawk helicopters, but after conversion training had been completed, the unit moved to Townsville where it disbanded on 14 February 1989. The squadron's personnel and helicopters were then used to form the nucleus of the Army's 5th Aviation Regiment.