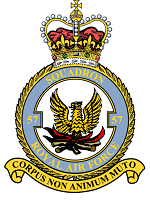 For the purpose of this website, 57 Squadron is included as one of the RAF Squadrons in which Australians served fought and died during WW II.

The Empire Air Training Scheme supplied tens of thousands of aircrew for the Royal Air Force (RAF) air war in Europe during WW II. While a number of so-called 'Article XV' national squadrons were created in Fighter, Bomber and Coastal Commands of the RAF, the majority of Australian aircrew were posted, along with their Commonwealth colleagues, to RAF Squadrons as individual crew members,where they would 'crew up' often with a very multi-national aircrew comprised of men from all over the Commownwealth. Ground staff were similarly assigned.

No.57 Squadron was equipped with the Bristol Blenheim twin engined light bomber at the outbreak of the Second World War.  In September 1939 was one of the first RAF squadrons to move to France.  It was intended that it would operate as a strategic reconnaissance unit.

After the end of the 'Phoney War' and start of the German Blitzkreig in the west, on 10 May, the squadron began eight days of costly attacks on German troop formations.  A combination of heavy losses and the speed of the German advance resulted in wthdrawal to England in late May.   It continued to fly reconnaissance missions until July, when the squadron was moved north to Scotland.

A few months of anti-shipping operations over the North Sea followed, before in November 1940 the squadron was destined for conversion to the Vickers Wellington medium bomber and thus became a night bombing squadron in Bomber Command.  On 13 January 1941 the squadron flew its first night bombing mission, in which role it would continue for the rest of the war.

Conversion to the Avro Lancaster took place in September 1942, by which time the squadron was part of No.5 Group as part of Bomber Command's main force from then until the end of the war.

Its final missions included taking part in the 25 April 1945 attack on Hitler's mountain retreat at Berchtesgaden in Bavaria, and in the final Lancaster operations of the war, when four aircraft from the squadron dropped mines in Oslo Fjord.

During the War the squadron flew 5151 operational sorties and lost 172 aircraft.  During WW2 its squadron code was 'DX'.