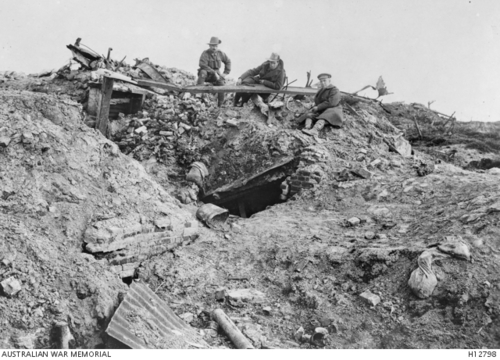 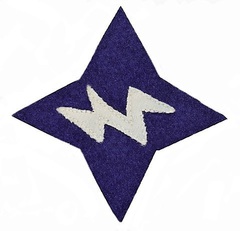 The new unit received the name of the Australian Electrical and Mechanical Mining and Boring Company, and because of its abbreviation A. E. & M. M. & B.
Coy it was sometimes jocularly referred to as the alphabetical company.

The company established itself on 16 May in the Meat Market building in Hazebrouck. A large barn half a mile out on the Borre road was used at first as a workshop, but soon the shop moved into a cycle accessories factory in the Rue de Borre. Shafting was erected and machines installed. Power was supplied from a captured 12 H.P. Gardner-Bosch engine.

The site was very suitable, being in the middle of the company’s allotted area of operation which was the front from south of Arras to Nieuport on the Channel coast, held by two armies, and the line of communications area lying in rear.

Hazebrouck was thirty to forty miles behind the front line, which for nearly two years moved only a few miles forward or back in spite of heavy fighting in the Arras, Loos, Armentières and Ypres sectors. The company was responsible for installing and maintaining lighting and power plant, pumps and fans throughout the First and Second Army areas, for deep well boring in both forward and rear areas, and for shallow boring along the front. A large proportion of the men were employed forward, where they were constantly being shelled, not only on the job, but coming and going, being frequently on the move. Electricians repairing power cables were especially vulnerable.

After a tour of duty in forward areas men needing relief would be brought back to work in the shop at Hazebrouck. The organization then divided
its front into three sectors—First Army, Second Army South, Second Army North—each under a subaltern. In addition there was the boring section. At company headquarters the adjutant controlled the workshop through a shop foreman, the store through the quartermaster-sergeant, and two emergency teams, one for low speed engines and one for high speed engines.2

The unit soon established a reputation for conscientiousness and reliability. C. E. W. Bean quotes3 the diary of an inspecting officer from General Headquarters, who noted that . . . the commander of a British tunnelling company (Major Wraith) had ‘nothing but praise for Morse and his men, who efficiency and “devotion to duty” are a matter for his enthusiastic commendation. If a pump goes wrong, it is out of the mine, back to the shops in Hazebrouck, and again underground in 24 hours. The Australians do not work by hours, but by contact—to keep the water down.’ The increase in tunnelling activity during 1916 brought with it the need for generating sets to light the workings.

These were sited as far forward as possible—often within 300 yards of the front line—in order to shorten leads to the mine shafts, so vulnerable to shell fire.
The sets were installed in cellars of houses or in surface shelters, special silencers being used to prevent detection. As heavier artillery came into use it was found necessary to keep surface sets farther back, out of minenwerfer range, and where possible to put the plant in deep dug-outs. Such underground engine rooms presented obvious difficulties.

See the rest of the article HERE (www.tunnellers.net)