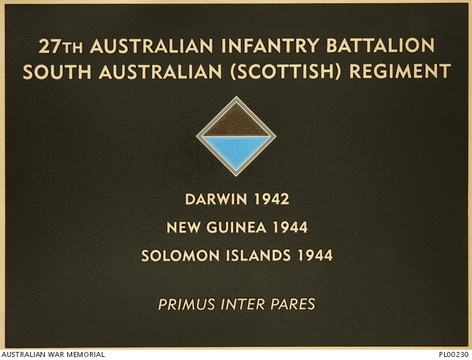 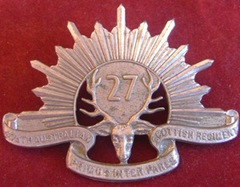 With thanks to the Royal South Australian Regiment Association

After the First World War the defence of the Australian mainland lay with the part time soldiers of the Citizens Military Force, otherwise known as the Militia. The Militia was organized to maintain the structure of the First AIF and kept the same numerical designations. In 1928 the 27th Infantry Battalion became associated with the Royal Inniskilling Fusiliers (the 27th Regiment of Foot).The 27th Battalion (Scottish) in WW2 was the CMF / militia counterpart of the 2nd/27th Battalion (/explore/units/11) raised for service overseas.

It had a strong affiliation with South Australia's South east and the rural centre of Mount Gambier.

In 1938 the 27th became the “South Australian Scottish Regiment”, wearing the MacKenzie tartan, and was associated with the
Seaforth Highlanders. Like many other units at the time, it had adopted a Scottish affiliation wearing a tartan kilt as part of its ceremonial uniform, and fostering a Pipes and Drums band, both of which persisted with its subsequent CMF guise well into the 1970s.  Legend has it that the Pipes and Drums were not always appreciated by its sister battalions when the brigade was in camp.

The 27th was originally part of South Australia’s 3rd Brigade.

With the outbreak of the Second World War in 1939, the 27th was called up for protective duties in South Australia and held regular training camps. On 9 December, two days after Japan entered the war, the battalion was mobilised and travelled to Darwin by road and rail - the journey took six days.

The battalion was based at Winnellie and throughout January worked on defensive positions at Nightcliff, Casuarina, Rapid Creek, Shoal Bay, Leeanyah Swap, Howard River, and Lee point. The 27th got its first taste of action in Darwin, with the Japanese bombings of the town throughout 1942.  In December 1943 the 27th joined the 23rd Brigade, previously part of the 8th Division. When two of its battalions were captured on Ambon and Timor the brigade was reformed with Militia units. The 7th and 8th Battalions also joined the brigade.

After being in Darwin for over a year, in March 1943 the 27th was relieved and returned to Adelaide. In December the battalion again headed
north, this time to the Atherton Tablelands for intensive training.

The 27th was deployed on Active Service late in the war, after having being gazetted as an AIF unit, as part of the 23rd Brigade, to Bougainville, where it was the first Australian unit to land in order to relieve US units there.

The 27th’s role was to defend the airfield on Green Island and conducted surveillance of the surrounding islands still occupied by the Japanese. To escape the boredom and monotony, volunteers from the 23rd Brigade also worked as crews on American PT boats, raiding Japanese occupied islands in New Ireland and New Britain.

After years of static garrison duties, the 27th was finally about to go into combat. For six weeks the battalionpatrolled extensively and carried out several small attacks, capturing Little Hunt’s and Berry’s Hills, as well as Tiernan’s Spur.

Having been “blooded”, the 27th moved to the Bonis Peninsula in the Northern Sector. The Japanese were far more active in the Northern Sector and, like the Australians, carried out long range patrols and set booby traps. The 27th was also subject to frequent shelling from Japanese artillery, even on 15 August, the day Japan surrendered.

In September the 27th returned to Torokina, the Australian base on Bougainville. With the war over, the ranks of the 27th thinned, as men were discharged, transferred, or volunteered for the occupation of Japan. By mid-1946 most of the battalion had returned to civilian life and the 27th was disbanded on 1 May 1946.