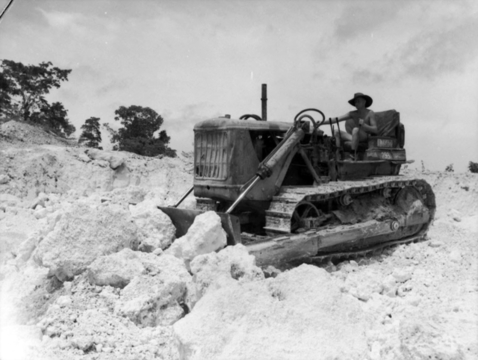 No. 5 Airfield Construction Squadron (5ACS) was a Royal Australian Air Force (RAAF) construction squadron in WW2, and became the longest lived of these units serving in the BCOF in Japan, and later in Thailand and Vietnam until it was eventually disbanded in 1974.

Airfield Construction Squadrons were the RAAF equivalent of Army Engineers, with a primary task of constructing and maintaining forward airfields,  runways and support infrastructure in the Pacific Campaign. They were raised in 1942 following the entry of Japan into the war.  It was immediately evident that there was a paucity of airstrips across the South West Pacific Area to support air operations.  Numbers of these units also provided support to USAAF and US Marine Corps units.

No. 5  ACS was formed as No. 5 Mobile Works Squadron in December 1942 and operated in the New Guinea and Islands Campaigns and the Borneo Campaign during World War II.

Throughout 1943 it operated on Goodenough Island where it built Vivigani Airfield and it also supported No. 6 ACS at Milne Bay. In November 1943 it returned to Australia for refit and recuperation.

In early 1944 it returned to New Guinea at Aitape working as part of a joint Australian / US aviation engineer construction organisation before relocating to Noemfoor Island in mid 1944.

Early in 1945 it was on to Biak, then Morotai which was the assembly area for the forthcoming Borneo operation.  5ACS was deployed to Labuan in North Borneo where it saw out the war.

BCOF Japan The squadron was one of only a few RAAF airfield construction units to be retained at the end of the war, and formed part of Australia's contribution to the occupation of Japan from 1945 until it was disbanded in June 1949.  5ACS provided engineering support to BCOF for the next three years. Its initial priorities were to repair the airfields at Bofu, Iwakuni and Miho. By mid-1946 5ACS was engaged in work on these airfields, building small forward airstrips for army reconnaissance aircraft and maintaining another four airfields in BCOF's area of responsibility. These tasks were of great importance to the BCOF, and Australian aviation historian Alan Stephens has written that "No. 5 ACS's achievements were probably the most significant of any Australian unit—land, sea or air" during the occupation of Japan. Japanese labourers and tradesmen were employed on all of 5ACS' projects, with the squadron's personnel undertaking specialist roles. The size of BCOF was reduced in 1948 and the Australian Government decided to reduce the RAAF force in Japan to a single flying squadron. Accordingly, 5ACS' remaining responsibilities were gradually transferred to the works officer of No. 77 Squadron and the squadron was disbanded at Iwakuni on 30 June 1949

5ACS was re-raised in August 1951 and worked on several RAAF airfields in Australia. It also provided small detachments of engineers to support RAAF deployments to South Vietnam and Thailand during the Vietnam War. The squadron was the RAAF's only airfield construction unit from 1961 onward, and was disbanded in December 1974.

The history of the Air Force Construction Units is one of toil and sweat, of personal resource and professionalism. During peace, members served in remote areas under harsh conditions. Familial pressures were high. The men undertook hard physical work to build the facilities which were, quite often, taken for granted by those who followed. Always First, the motto of 5ACS, is appropriate as a title for this work. As will be seen, construction units were the pioneers, often landing with assault troops to ensure that airfields were operational in the shortest possible time. Their work remained unsung. Often they had moved away before the main operational force deployed to the facilities that they had prepared.  The Airfield Construction Squadrons were born of necessity, always understrength in men and materiel, and the recipients of plaudits and criticism.

An extract from the Foreword of 'Always First',