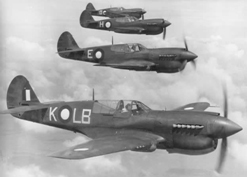 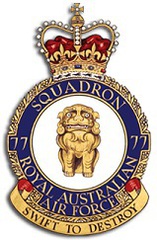 77 Squadron (www.awm.gov.au) was initially formed at RAAF Pearce near Perth, in 1942, during the Second World War, operating throughout the Pacific using the rugged and well regarded Curtis P40 Kittyhawk fighter.

As the Japanese advanced in the South West Pacific during early 1942, the RAAF hurriedly established three fighter units—Nos. 75, 76 and 77 Squadrons—equipped with Curtiss P-40E Kittyhawks recently delivered from the United States.

77 Squadron was formed at RAAF Station Pearce, Western Australia, on 16 March, with a complement of three officers and 100 men. Initially responsible for the air defence of Perth, it re-located to Batchelor Airfield near Darwin, Northern Territory, in August, under the command of Squadron Leader Dick Cresswell.  77 Squadron thus became the first RAAF fighter unit to be stationed in the area. Until this time, air defence over Darwin had been provided by the P-40s flown by the USAAF's 49th Fighter Group.  77 Squadron moved to another of Darwin's satellite airfields, Livingstone (/explore/memorials/1688), in September.

Among its pilots was John Gorton, future Prime Minister of Australia.  77 Squadron saw action defending Darwin from Japanese air raids and claimed its first aerial victory just after 5 a.m. on 23 November 1942, when Cresswell destroyed a Mitsubishi "Betty" bomber.  It was the first "kill" for an Australian squadron over the mainland, and the first night victory over Australia. As of 24 December, the unit's strength was twenty-four Kittyhawks.

In February 1943,  No. 1 Wing and its three Supermarine Spitfire squadrons became operational in the Darwin area, so 77 Squadron was transferred to Milne Bay in New Guinea. Along with Nos. 6, 75 and 100 Squadrons, it came under the control of the newly formed No. 71 Wing, which was part of No. 9 Operational Group, the RAAF's main mobile formation in the South West Pacific Area.

No. 77 Squadron registered its first daytime victory on 11 April, when a Kittyhawk shot down a Mitsubishi Zero taking part in a raid on Allied shipping near Buna. Four days later the Japanese attacked Milne Bay; the squadron claimed four bombers and a fighter for the loss of one Kittyhawk. By this time, Allied headquarters had finalised plans for a drive north to the Philippines involving heavy attacks on Rabaul and the occupation of territory in New Guinea, New Britain and the Solomon Islands.

77 Squadron began moving to Goodenough Island in May, and was fully established and ready for operations by 15 June.  As Japanese fighter opposition was limited, the squadron took part in several ground-attack missions in New Britain, armed with incendiary and general-purpose bombs, a practice that had been employed by Kittyhawk units in the Middle East.  During one such raid on 2 August, Cresswell's designated successor as commanding officer, Flight Lieutenant Daryl Sproule, was forced to crash-land on a beach and was captured and executed by the Japanese.

Cresswell remained in command until Squadron Leader "Buster" Brown took over on 20 August. Japanese fighter strength in New Britain and New Guinea increased in September and October, and eight of No. 77 Squadron's Kittyhawks were briefly detached to Nadzab as escorts for the CAC Boomerangs of No. 4 Squadron, which were supporting the 7th Australian Division.[31]

In January 1944, No. 77 Squadron took part in the two largest raids mounted by the RAAF to that time, each involving over seventy aircraft attacking targets in New Britain.  It was subsequently assigned to Los Negros in the Admiralty Islands, under the control of No. 73 Wing, along with Nos. 76 and 79 Squadrons.  No. 77 Squadron's ground party went ashore at Los Negros on 6 March, in the middle of a firefight with Japanese forces. Fourteen of the squadron's Kittyhawks arrived a week later, and another ten on 28 March.  Their primary duty was providing air cover for Allied shipping, though no Japanese aircraft were encountered; they also carried out ground-attack missions in support of US troops on Manus Island.

Following the capture of the Admiralties, which completed the isolation of Rabaul, No. 77 Squadron remained with No. 73 Wing on garrison duty at Los Negros from May to July 1944.  Between 13 August and 14 September, the squadron transferred to Noemfoor in western New Guinea to join Nos. 76 and 82 Squadrons as part of No. 81 Wing under No. 10 Operational Group (later theAustralian First Tactical Air Force), which had taken over the mobile role previously performed by No. 9 Group and was supporting the American landings along the north coast of New Guinea.

Cresswell, by now a wing commander, arrived for his second tour of duty as commanding officer on 26 September.   Operating P-40N Kittyhawks, No. 77 Squadron bombed Japanese positions on the Vogelkop Peninsula in October and on Halmahera in November.  Cresswell handed over command in March 1945.  The squadron moved to Morotai on 13 April and conducted ground-attack sorties over the Dutch East Indies until 30 June, when it redeployed with No. 81 Wing to Labuan to support the 9th Australian Division in North Borneo until hostilities ended in August. The squadron's tally of aerial victories during the war was seven aircraft destroyed and four "probables", for the loss of eighteen pilots killed.

This next section an extract from the AWM unit history

After the war the squadron was sent to Japan as part of the occupation force, equipped with the CAC-built version of the P51D Mustang.  They were based at Iwakuni.  In 1950, while the squadron was preparing to return to Australia, North Korean forces invaded South Korea. 77 Squadron was quickly committed to support the United Nations forces in Korea and for the next three years it served with distinction.  It converted to Gloster Meteor twin engined jet fighters however they were found to be vulnerable to the Russian-designed MiG 15's flying against the UN forces so 77 Squadron's role became ground attack.  77 Squadron remained in Korea until 1954 and upon returning to Australia it was based at Williamtown, New South Wales. In November 1956 the squadron was re-equipped with new, Australian-built Sabre fighters, replacing the outdated British Meteors, which the squadron had flown since 1951.

In 1958 Australia’s air commitment to the Malayan Emergency increased and 2 Squadron, a bomber squadron, was sent to Malaya, followed later by 3 Squadron, and then 77 Squadrons in February 1959. Both 3 and 77 Squadrons were fighter squadrons and flew Sabres.

By 1959 the air war during the Emergency had virtually ceased and 77 Squadron only occasionally participated in air operations, flying ground attack missions against jungle covered targets. Stationed at the RAAF Base Butterworth, in north Malaya near the island of Penang.  77 Squadron carried out its first operation on 13 August, a joint bombing raid with 3 Squadron against three communist terrorist camps. The strike was perfectly coordinated but of little value, as the only visual results were, as one pilot described it, “several rubber trees severely damaged and thousands of monkeys scared fartless”. 3 and 77 Squadrons took part in two more strikes in June 1960. On 22 July two Sabres collided in a mid-air accident. Both pilots, Flight Lieutenant Worth and Flying Officer Bartrop, were able to eject successfully. Bartrop was rescued almost immediately and Worth was rescued three days later.

Although the Emergency ended in 1960, the tensions in south-east Asia kept the squadron in Malaysia until 1969. In September 1964, Indonesia opposed the formation of Malaysia and during the Indonesian Confrontation (/explore/conflicts/8), Indonesian aircraft dropped paratroopers into Johore.  These were quickly neutralised and captured.  Following riots in Singapore, a state of emergency was declared. On 3 September, 77 Squadron placed four aircraft on five-minute alert and its remaining aircraft on one-hour alert. All aircraft were armed with Sidewinder missiles and guns, and were fitted with drop tanks. On 7 September, 3 Squadron moved six aircraft to Royal Air Force Base Changi, on Singapore, and the rest of the squadron came under 77 Squadron’s command, before also going on to Singapore.

An extra 15 aircraft and 52 ground crew were ferried in from Australia to help maintain the seven-day-a-week alert. By the end of the month, tensions were easing, with only two aircraft on standby. However, in November fears again escalated, when 90 Indonesians attempted to land at Malacca; both squadrons were placed on high alert. The squadron’s unit history describes 1964 as a year of “heightened unease”. The Confrontation came to an end the following year.

77 Squadron returned to Williamtown, where it is still based, in early 1969.  It then converted to Dassault Mirage III supersonic fighters.