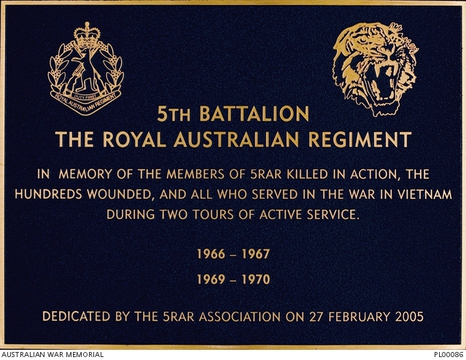 5RAR deployed to Vietnam in early May 1966. Its first action against the enemy was on Operation Hardihood, under command of the US 173rd Airborne Brigade which also included a company of 1RAR. The operation was to clear and establish the Task Force Base at Nui Dat which was achieved.

6RAR arrived in Vietnam to join the Task Force and took up a defensive position at Nui Dat in June 1966.

detained. Cordon and search operations became one of the Battalions’ major strategic activities to deny local Viet Cong access to villages and supplies. In the early hours of 17th August, the Viet Cong mortared and shelled Nui Dat and 5RAR was hastily returned to secure the base. 6RAR was dispatched to destroy the perpetrators.

This led to the now famous battle of Long Tan. D Company 6RAR encountered the 275th VC Regiment and the D45 Battalion and despite being incredibility outnumbered, forced them to withdraw with the help of Australian Artillery and ammunition resupply by RAAF helicopter. D Company 5RAR assisted in clearing the battlefield on 19 August.

5RAR was involved in extensive search and destroy operations with a key area being the Nui Thi Vai Mountains, where it engaged the 274th VC Regiment and cleared numerous tunnels and fortifications, capturing the wireless and log book of the Deputy Commander of 274 Regiment, a major intelligence find for the Task Force.

From September onward, operations were to consist of search and destroy, operations, pacification around populated areas and interdiction of enemy supply and operational movement. In October and November 5RAR and 6RAR conducted several cordon and searches which were successful in apprehending Viet Cong suspects. During the last months of 1966, 5RAR was directed to concentrate on cordon and searches and pacification. In February 1967, a cordon and search of An Nhut village just to the west of Dat Do led to the arrest of more than 20 Viet Cong suspects.

In mid-February 1967 5RAR was tasked to clear the Long Hai Hills, a large enemy base area in the centre of the province, so that the village of Long Phuoc Hai could be cleared of enemy.  Operation Renmark commenced with a series of B52 strikes and elements of 5RAR advanced towards the objective mounted in APCs. However, the enemy had departed having been alerted by local VC friendly villagers. Before they departed, they set up an IED and laid M16 anti-personnel mines. A 500 lb bomb detonated under an APC and those who rushed to help detonated the anti-personnel mines causing heavy casualties. This was far from the only failed attempt to clear the massive hill mass which had been a base area for insurgents for hundreds of years.

In March 1967 5RAR cleared and established the Horseshoe Feature which was to be a pivotal part of establishing “the minefield”. For the remainder of their tour, 5RAR concentrated on ambush patrols which were successful, cordon and searches and pacification operations with mixed results.

5RAR departed Vietnam 0n 30 April, having been engaged in 18 major operations, returning to Sydney where it marched through the streets to a warm welcome. The Battalion scribe noted that the South Vietnamese authorities were unable to ensure the safety and security of their people and in cases were allowing Viet Cong to infiltrate towns and villages as well as the minefield where they disarmed and remove mines to be used against Australian troops.

5RAR returned to Vietnam in February 1969, just in time to experience another Viet Cong offensive. Once again the Task Force was required to help in the protection of the US base areas to the north as well as defending the province.

In March 5RAR deployed to an area around 20 kms east of Bien Hoa, but had no contact. On being moved to a known enemy base area nearby, they experienced considerable heavy and successful contact, forcing the enemy to withdraw.

On the evening of 5-6 June, Viet Cong forces occupied the village of Binh Ba just north of the Task Force base. The Ready Reaction Force, D Company 5RAR, supported by APCs and Tanks was deployed and prepared to attack once the villagers were evacuated. When the attack began it was obvious that the enemy was at least of battalion size. A second 5RAR company joined the battle and the Commanding Officer assumed over-all command. The fighting continued throughout the day on 6 June with the enemy having to be cleared from most houses. There was a lull overnight but hostilities recommenced on 7 June, lasting for most of the day and resulting in a resounding victory for the 5RAR group.

The Task Force priorities were now pacification, improving the capability of the Vietnamese RF and PF forces and continuing province based operations.

On 29 July 1969 5RAR launched Operation Camden, designed to destroy the VC units which occupied the Hat Dich area, although one company was detached to train a South Vietnamese Regiment. Their particular target was the infamous 274th VC Regiment. Previous operations designed to achieve this goal had been unsuccessful with the enemy melting away in the jungle particularly at night. However, this time they were prepared to stand and fight. They were soundly defeated and eventually forced to withdraw.

During the operation, 5RAR cleared a significant amount of jungle to open up previously hidden escape routes and destroyed numerous bunkers and defensive positions. However, the main lesson was that despite the very great success of this operation, it was obvious that the enemy was far from being defeated.

Operations in accordance with the current directive continued. In particular 5RAR provided small detachments to train the South Vietnamese RF and PF units having experienced a tough but successful tour of duty, 5RAR departed Vietnam in February 1970, returning to Sydney, to be replaced by 7RAR.

On 3 December 1973, 5RAR was linked with 7RAR and became 5/7RAR which was relocated to Robertson Barracks in Darwin. The battalion was delinked on 3 December 2006 after 33 years, with 5RAR remaining in Darwin and 7 RAR moving to Adelaide.

5RAR provided the infantry component for an Overwatch Battle Group (OBG)  in Iraq in 2006. The on-going security problems in Iraq led to the formation of an Overwatch Battle Group (OBG (W) to ensure that the southern provinces of Iraq had a reaction force available in the event of activity by the insurgents. They participated in numerous patrols throughout the provinces and assisted with the training of the Iraqi Army.

In March 2007 5RAR plus a Cavalry Troop and supporting elements deployed to Camp Terendak to command the Overwatch Battle Group as part of the 1st UK Mechanised Brigade. They conducted operations throughout the provinces, were responsible for the security of Camp Terendak, undertook construction tasks to help the local people and assisted in mentoring and training local Iraqi units The Battle Group completed a successful tour of duty in December 2007.

In October 2008, following on-going deterioration in the security situation 5RAR deployed to East Timor as the Timor Leste Battle Group 5 (TLBG-5) which was part of an International Stabilisation Force mounted under Operation Astute. In June 2009 the battalion completed its tour of duty and was replaced by 2RAR.

In mid - 2010, 5RAR plus more than 20 other units commenced an intensive training program in preparation for deployment to Afghanistan as Mentoring Task Force 2. (MTF-2)  Their operation began on 21 October 2010 when they replaced the 6RAR based MTF-1. The mission was to mentor and support the 4th Brigade of the Afghanistan National Army in Uruzgan Province. The task was daunting as there were up to 2500 Afghan troops in the Brigade and the scope required mentoring from the level of a brigade headquarters to rifle section tactics. Nevertheless the operation was a success.

The Task Force established three forward bases in the province for ease of  management and the Australians lived and worked with their Afghani counterparts which built a good level of acceptance and trust.

The 4th Brigade mounted 12 major operations with the guidance and support of the Australians who also controlled air and artillery support when required. On 25 June 2011 they handed over to MTF 3 based around 2RAR, and returned home for a well - earned leave.

The refurbished Memorial below which is located at Binh Ba Lines, Robertson Barracks Darwin was dedicated in the presence of His Excellency the Governor

General in November 2015 as part of the 50th anniversary commemoration. The names on the left are of the 25 members who were killed in action on the

first tour of Vietnam and those on the right are of the 25 who were killed in action on the second tour.