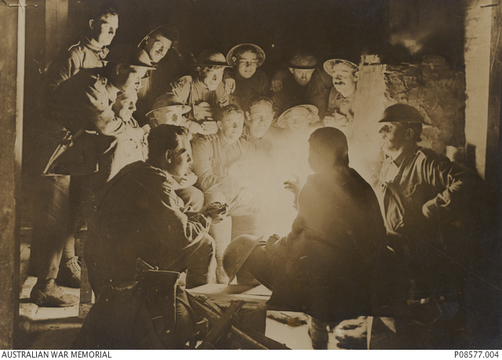 The 1st Light Trench Mortar Battery belonged to the 1st Brigade comprising the 1st, 2nd, 3rd and 4th Battalions, all from NSW.  Men were transferred from these units into the LTM Company to raise it in April 1916.

Trench Mortar Batteries and Machine Gun Companies gave the Brigades their own integral fire support. The trench mortars were the Brigade's own ‘artillery’ and the soldiers were generally drawn from units within the Brigade. The Battery would have provided support exclusively to the Battalions of the Brigade.

The light trench mortar was the Stokes 3 inch mortar.  It was effectively not much more than a simple tube for a barrel, with a bipod to support it and a steel base plate on which to mount the tube and bear its recoil.  It fired a cylindrical bomb to about 800 yards, although its range improved throughout the war.  These were issued to Light Trench Mortar Batteries, attached to each Brigade Headquarters.  They were relatively mobile and could be dismantled and packed up in minutes.

Trench Mortar Batteries would have been high on the list of priority targets for enemy counter battery fire - fired by heavy artillery. This meant they may not be the most welcome of companions in the front line! Many of the casualties sustained by mortar battery personnel would have been thus inflicted. The other vulnerability lay with their being relatively close to the Front Line and thus potentially vulnerable to enemy infantry raiding parties.