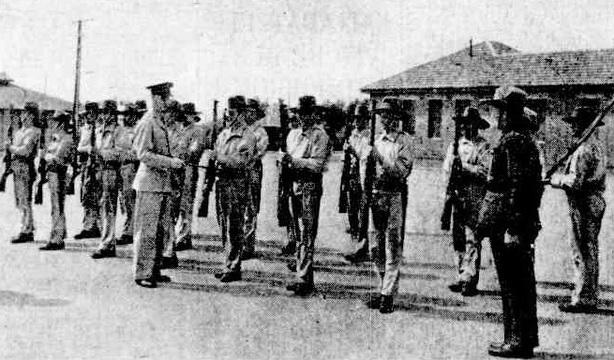 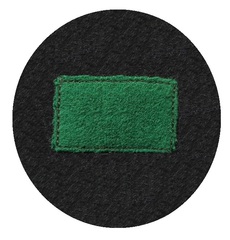 The personal that comprised the battalion were mostly all ex World War One veterans from Adelaide and surrounding district areas with middle aged volunteers also playing an important part in the normal functioning of the unit. For the most part, the 4th Garrison Battalion guarded vital Adelaide assets which included the cable station at Grange, the radio mast at Rosewater and the several ammunition depots dotted in various locations in and around Adelaide. The battalion also took care of general security duties at other military sites in South Australia and was also responsible for some temporary Internment Camp security. Of particular note, was the special way in which the Garrison Battalion swapped over guard duties at the gate at Keswick Barracks. When 1 pm came each day a 'ceremony' was performed with the new guard marching to the gates whilst accompanied by the Battalion Band playing the marching song. Indeed the 4th Garrison Battalion had a very popular Battalion Band which regularly played at social occasions. Due to the wide range of duties undertaken the 4th Garrison Battalion was officially redesignated with the title '4th Garrison Battalion (Internment Camp and Internal Security)' in 1942, whilst in 1943 it was also provided with a new colour patch: a Green rectangle on a Black circle.

Originally commanded by Lieutenant-Colonel John Morphett Irwin (a Major with the 7th Field Artillery Brigade during World War One), in 1940, however, Lieutenant-Colonel Felix Gordon Giles (a Major with the 10th Infantry Battalion during World War One) took over as Irwin was subsequently transferred to the newly created 4th Garrison Brigade. Under both of these men the Garrison Battalion served as Adelaide's main volunteer defence unit throughout World War Two until it was disbanded in 1945. It never saw action against an enemy combatant in that time. Between 1939 and 1945, however, the 4th Garrison Battalion suffered 24 losses due to illness or accidental training wounds. A full list of these losses is found below.

Garrison Battalions were part of the Australian Army Reserve with the role of manning fixed defences and vulnerable points. The personnel were Class B men, those between 48 and 55 who had seen war service before September 1939, therefore mostly WW1 veterans. Prisoner-of-War and Internment Camp units were part of the Garrison Battalion organisation but were on a special establishment where the need for prior war service was waived and females were sometimes included.

Initially, all Garrison Battalions wore the same shoulder patch, a black square on a green square. Numerous requests were made by battalions to individualise their patches and in late 1942 the system was adopted of geometric shapes, green on black in a reversal of the original design, approval for which was dated 11 December 1942. Source (www.iwm.org.uk)