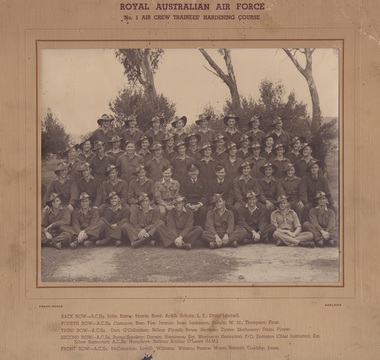 Under the Empire Air Training Sheme, hundreds of schools and training units were established across the British Empire with the sole aim of training aircrew for the Royal Air Force in its fight against Nazi Germany, and later Japan.  Initial training units were largely sited outside the UK, particularly in Australia, Canada and East Africa (Rhodesia now Zimbabwe) to avoid the risk of interdiction by enemy aircraft and to be close to home locations.  In Australia's case they trained exclusively RAAF aircrew because it was at the end of the earth and too hard to get students to and then back again!

They were sited in locations where the weather was benign enough to allow training all year round.  Similarly, a lack of significant terrain features was another site selection attribute.  Thus inland New South Wales, Victoria, South and Western Australia and southern Queensland were the principal sites.

Intermediate training was conducted in Australia, Canada and Rhodesia.

'Finishing schools', or Operational Training and Conversion units were generally in the UK, (although the RAAF had OTU and conversion schools in Australia for the SW Pacific theatre) and some were unavoidably located near to the units to whom they were providing crews (such as Heavy Bomber Conversion Units).

Throughout, there was a steady stream of accidents, many fatal, in the rush to get aircrews to Britain to take their part in the war. Small clusters of offical headstones dot the landscapes in each of these countries generally in some sort of proximity to the bases from which they flew, marking the points at which aircraft impacted the ground for all sorts of reasons, with their trainee crews on board.

Their output was prodigious, but many of the graduates were to become statistics in the air spanning theatres of war across the earth.  The RAAF personnel sent to Europe in WW2, particularly those who served in the RAF's Bomber Command, suffered the highest loss rates of any cohort of Australian personnel in WW2.

The Scheme was an amazing construct pulled together across the globe.  It more than met its creators' vision and trained a generation of pilots, many of whom went on to fly after the war, taking aviation to all corners of the planet.

A comprehensive listing of EATS schools is provided via the link in the sidebar.  There are separate listings or each of the Australian-based Schools which can be searched by location, and the Canadian schools have an aggegated listing.