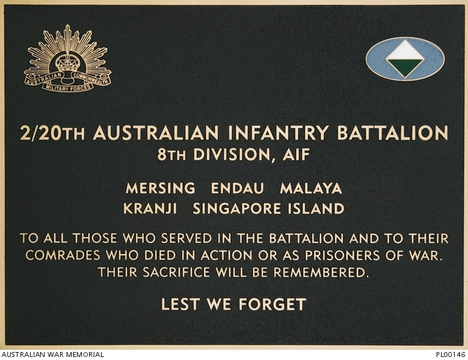 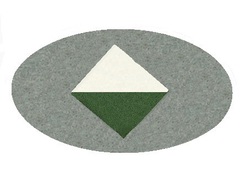 The 2nd/20th Battalion was part of the ill-fated 22nd Brigade in the 8th Division.

The Battalion and its parent Brigade were raised in Sydney at Wallgrove Camp in July 1940.  In early 1941 they embarked for service in Singapore, then a tropical outpost of the British Empire, while war raged in Europe and the Middle East.  But Japan cast a shadow over the Far East and in December 1942 it entered the war with simultaneous raids on Pearl Harbour in Hawaii and on Clark Field in the Philippines, and an amphibious landing at Kota Baru on the north east coast of Malaya.  The Pacific War had begun.

The Japanese landing at Kota Bahru on Malaya's north east coast and their rapid advance down the Penisula completely overwhelmed the British defensive plan, primarily on the basis of the speed and manoueverability of the very experienced Japanese troops involved and the fact that they very quickly gained air superiority.

The 2nd /20th was not committed to action until nearly a month after the initial Japanese landings.

After conducting a series of defensive actions in the vicinity of Mersing, the Battalion suffered losses through bombing and enemy action and began an orderly withdrawal to Singapore Island where they were located on the islands west, but spread very thin.  The Japanese were able to penetrate this perimeter but the Battalion inflicted heavy casualties initially until forced to withdraw.   In reality the fight was largely lost before it began, as Singapore was dependant for water on a pipeline from Johore Bahru on the southern tip of the Malay Peninsula, which the Japanese quickly cut off before relentlessly bombing the island.

The British forces surrendered on 15 February 1942, and the men of the 2nd/20th began a three and a half year ordeal as prisoners of the Japanese, which many of them were not to survive.