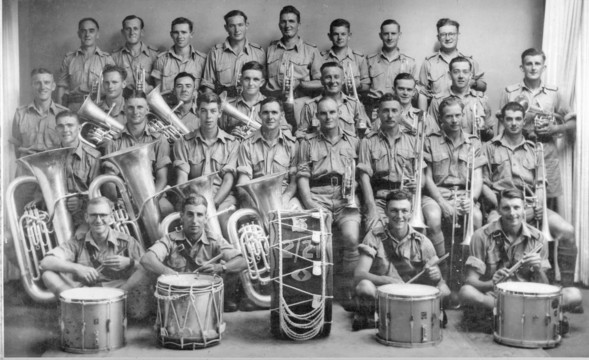 The 2nd/21st Infantry Battalion was formed in Victoria as part of the 23rd Brigade in the 8th Division.  It was destined to be assigned what was arguably the worst of the poor circumstances into which the hapless 8th Division was placed; it formed "Gull Force" on the island of Ambon.  Outnumbered and outgunned the Battalion suffered tactical defeat against overwhelming odds particularly air power, heavy weapons and tanks.  The the real nightmare began with a large number of men massacred outright, followed by systenmatic and unrelenting brutality, starvation and overwork as Prisoners of War at the hands of the Japanese, that rivalled the worst of the atrocities that country's soldiers were to perpetrate in their brief domination of SE Asia.

A comprehensive Web page is operated by the 2nd/21st Battalion Association HERE (www.gullforce.org.au)

The following is an extract of that site.

The 2nd/21st Battalion was formed at Trawool, near Seymor in central Victoria in August 1940. Their commanding officer was Lt Col. L.N.Roach. Men who had volunteered to join the A.I.F. at various depots in the Melbourne suburbs, country towns and in particular Shepparton, were transfered to Trawool to eventually become known as the 2nd/21st  Battalion A.I.F.

The 2nd/21st  Battalion was camped on the Shepparton side of the Goulburn River and due to the large number of men volunteering for active duty in the Middle East, there was an accute shortage of equipment that could be used for training. Through a programme of frequent route marches, hill climbing exercises and digging slit trenches the battalion became very fit.

Southern command ordered that all 8th Division units be transfered to a new camp at Bonegilla near Albury. The 2nd/21st and 2nd/22nd battalions left the Trawool camp on 23rd. September 1940 to march, with overnight bivouacs, a distance of 146 miles over the next 11 days. They were met by the 2nd/23rd battalion from Albury (known as Albury's own) on 4th October 1940.

The men's full scale training began and clothing and equipment slowly began to improve although the lack of equipment delayed the process. Other units passed through the camp on their way to active duty and this caused the men to feel restless as they felt that they were being left out.

On 23rd March 1941 the whole battalion left Bonegilla camp to begin the long journey across the centre of Australia to Darwin. Camp was made in Winnellie where they trained until, on 9th December 1941, they were notified to prepare for embarkation overseas, later to be told their destination was Ambon.

A convoy of three vessels - SS Both, SS Valentyn and SS Patras were escorted by cruiser HMAS Adelaide and corvette HMAS Ballarat the 650 miles to Ambon.

See the Association website for the full story of "Gull Force"