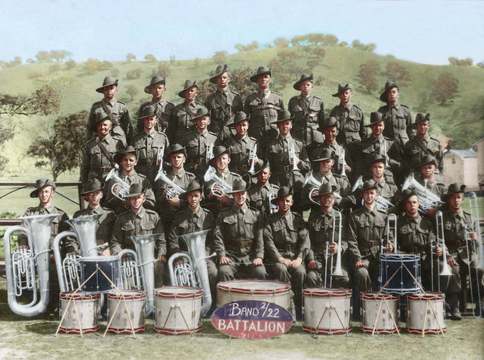 The 2nd/22nd Battalion was infamously sacrificed as part of 'Lark Force' in Rabaul, in the futile strategy of 'penny packeting' numerically inferior and under-resourced units in the path of the Japanese Imperial Forces in early 1942.

The Battalion was raised in Victoria as apart of the 23rd Brigade of the 8th Division, in July 1940.   Based initially at Trawool in Central Victoria, the Battalion relocated to Bonegilla on the NSW  / Vic border in September.  They marched overland to get there.  The Battalion remained in Bonegilla until it embarked for New Britain in April 1941.

It was amalgamated with a number of units already in the area, including the local unit of the New Guinea Volunteer Rifles,  an anti-aircraft battery, the Rabaul coastal defence battery, elements of the 2/10th Field Ambulance and 17th Anti-tank Battery, to form " Lark Force".

The force would later be supported by 24 Squadron, Royal Australian Air Force (RAAF) operating Hudson patrol bombers and Wirraway reconnaissance aircraft.. Its role was to protect the airfields at Lakunai and Vunakanau, and the seaplane base at Rabaul.

The disposition of 'Lark', ' Sparrow ' and 'Gull' Forces, and later 'Black Force' was among the worst decisions ever taken by Australian military planners.   They were ill-equipped and too few in number and so likely to be overwhelmed by enemy attack. The reasons given for this futile gesture and waste of scarce resources were and remain lame and bear no critical examination.  Nonetheless, the 2/22nd busied itself constructing defences and training for war in its designated area of operations.

On 20 January 1942 over one hundred Japanese aircraft attacked New Britain. 24 squadron tried to defend the island but its efforts were futile. The squadron's eight Wirraways took-off to intercept the raiders but were immediately attacked by a large force of Mitsubishi Zeros. The Wirraways were no match for the Zeros. Within seven minutes, three Wirraways were shot down, two crash-landed, and another was damaged. The squadron only had two Wirraways and a Hudson left. Its sick and wounded were evacuated the next day on the remaining aircraft, while the rest of its personnel had to trek through the jungle on foot to escape, some rescued by an Empire flying boat.

The ground forces were similarly overwhelmed. On 23 January 5,000 Japanese troops came ashore, outnumbering Lark Force nearly 5 to 1. Opposition crumbled in the face of this attack.  The Commander directed 'every man for himself', order collapsed and so began a sorry tale of loss.  Over 160 personnel were massacred at Toll Plantation. Some 400 personnel managed to escape back to Australia.  The remainder went into captivity.  In July 1942, most were loaded aboard the Montevideo Maru , bound for Japan.  The ship never made it, torpedoed off Hainan Island by the US submarine 'Sturgeon', resulting in the loss of all 1053 military and Civilian PoW.  It remains Australia's worst maritime loss.

Thus the short history of the 22nd Battalion came to an end.  It was not re-raised.