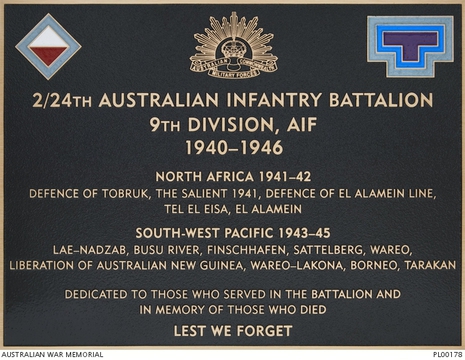 The 2/24th Battalion was an infantry battalion of the Australian Army, which served during World War II. A unit of the all-volunteer Second Australian Imperial Force (2nd AIF), it was formed in July 1940 from primarily Victorian volunteers and was known as "Wangaratta's Own" because of the time the battalion spent in the town during its formative period prior to deployment overseas.

It served with distinction in North Africa in 1941–1942 as part of the 26th Brigade, which was assigned to the 7th Division, before being reassigned to the 9th Division for the rest of the war.

In the Middle East the Battalion became part of the legendary 'Rats of Tobruk' when as part of the 9th Division, under the Command of Lieutenant General Sir Leslie Morshead,  known as 'Ming the Merciless' after a popular cartoon character of the period, they sucessfully held the town of Tobruk against the Afrika Korps of General Erwin Rommell, winning international acclaim and affording the Allies a victory over the all-conquering Axis forces.

When the rest of the AIF returned home in early 1942, to defend Australia against Japanese aggression, the 9th Division remained in the Middle East and formed a key part of the offensive forces at the Battle of El Alamein in late 1942.

In early 1943, the 2nd/24th Battalion returned to Australia with the rest of the 9th Division and later took part in campaigns against the Japanese in New Guinea in 1943–1944 and Borneo in 1945, before being disbanded in 1946.

The 2/24th suffered the highest number of casualties of any 2nd AIF infantry battalion.