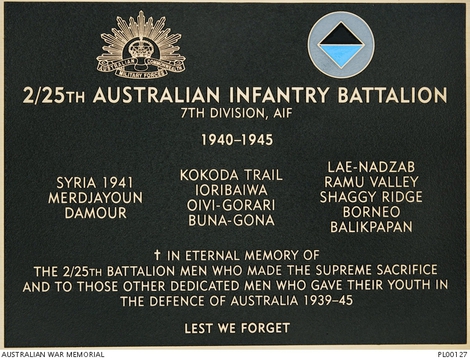 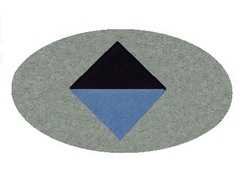 The 2nd/25th Battalion was raised in Australia in 1940 and manned with  volunteers drawn primarily from the state of Queensland, After completing initial nit level training the battalion undertook garrison duties in Darwin before deploying to the Middle East in mid-1941, as part of the 24th Brigade.

The 2nd/25th Battalion deployed for training and more garrison duties in the Western Desert and in Palestine.

On 11 April, the 25th Brigade, now part of the 7th Australian Division, began to move to Egypt to bolster the defences along the Libyan frontier against an expected German attack.  The 2nd/32nd Battalion was subseqently transfered to the 24th Brigade to bolster the garrison in Tobruk.  It remained with the 24th Brigade for the rest of the war and was replaced by the 2nd/25th Battlion in the 25th Brigade which likewise remianed with its new Brigade for the rest of the war.

In late May 1941, the 25th Brigade returned to Palestine to take part in 'Operation Exporter' the invasion of Syria and Lebanon, which began on 8 June. The 2nd/25th fought principally in dispersed company groups, around Merdjayoun where the 2/25th launched its only major attack of the campaign in an effort to retake the town after a Vichy counterattack had recaptured it a few days earlier. Encountering a force of French tanks, however, the battalion's attack was ultimately unsuccessful and they suffered heavy casualties, as well as losing over 50 men captured.

On the 25th June the Battalion was detached under command of the 21st Brigade, with which they carried out a series of advances inland due to concerns of a possible French counterattack around Beit ed Dine  ALong the way, they captured a number of towns and villages before an armistice came into effect on 12 July 1941.

The 2nd/25th remained in Lebanon as part of the Allied garrison until 14 January 1942, when with the rest of the Brigade, it began its journey back to Australia in response to the Japanese threat in the SW Pacific having entered the war on 7 December 1941.  The Battalion departed from Port Tewfik in Egypt on 9 February 1942 on a US ship, the Mount Vernon,  and disembarked in Adelaide on 10 March 1942, by which time the news was dire indeed as Singapore had fallen and the Japanese looked to be unstoppable. Encamped initially at Woodside in the Adelaide Hills, the Battalion then moved to Queensland and trained at Enoggera.

After a period of leave and training in Australia the 2nd/25th was deployed to Papua to reinforce the battered Australian militia units that had delayed the Japanese advance along the Kokoda Track.  It arrived in Port Moresby on 9 September and by the 13th was in action at Ioribaiwa. With the rest of the Australian force, comprised mainly of the 7th Division, the 2nd/25th withdrew and consolidated at Imita Ridge; the Japanese did not follow, having over-extended their supply lines.

The 2nd/25th subsequently participated in the advance back along the trail that followed the Japanese retreat and it fought major engagements at Templeton's Crossing (late October) and at Gorari (7-11 November).

The 2nd/25th was initially involved in the bitter, confused fighting in 'The Battle of the Beachheads" around Gona between 23 November and 4 December, by which time dwindling numbers had forced amalgamation of rifle companies. It returned to Port Moresby by air between 15 and 17 December and eventually sailed back to Australia in early January 1943 to be reinforced and retrained.

The 2nd/25th returned to Port Moresby in late July in preparation for the operations capture Lae, in New Guinea. FLown to Nadzab they participated in the advance on Lae and ultimately they became the first unit to enter the town which fell on 16 September.

On 29 September the 2nd/25th was flown from Nadzab to Kaipit and spent the rest of the year principally engaged in patrol actions in the Ramu Valley and the Finisterre Range. It returned to Australia on 10 February 1944, and after leave, postings in and out, equipment replenishment and the like, the Battalion relocated to the massive training complex on the Atherton Tableland in Far North Queensland.

Following over a year of training, the 2nd/25th departed Australia on 9 June 1945 for its last operation of the war. It landed at Balikpapan in Borneo on 2 July and its subsequent operations were concentrated around the Milford Highway - the site of the most determined Japanese resistance. The battalion's involvement consisted mainly of carrying out fighting patrols and establishing observation posts along the axis of the main advance up the Milford Highway. It was involved in a number of significant engagements throughout July as patrols came into contact with pockets of resistance and small Japanese grups attacked the battalion's observation posts before orders to cease aggressive actions came down from higher command in early August. Following that the battalion was involved in reconnaissance patrols as the war came to an end.

The war ended on 15 August and almost immediately drafts of long-service personnel began returning to Australia. The remainder of the Battalion arrived in Brisbane on 22 February, and it disbanded there on 12 March 1946.