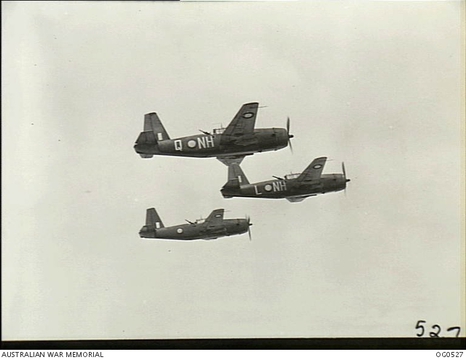 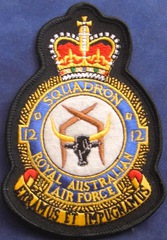 This is an extract from the AWM unit records page,  to read more please click on link to the right of this page

Formed at Laverton in Victoria on 6 February 1939, No. 12 squadron moved to Darwin in July. The unit was equipped with Avro Anson and Wirraway aircraft and flew routine patrols and convoy escorts. On 1 June 1940 Anson crew and personnel were posted out to form the Darwin-based 13 Squadron.

In 1941, 12 Squadron extended the range of its anti-submarine patrols and commenced training exercises with navy and army units in the area. Early the following year the squadron relocated to Batchelor airfield (located further inland) but left a detachment at Darwin. Two Wirraways from the detachment were destroyed in the attack on the city on 19 February. From 12 September the unit was renamed 12 (Dive-bomber) Squadron after being re-equipped with Vultee Vengeance aircraft. The first raids with these new aircraft took place on in June 1943 on the Tanimbar and Selaru Islands.

In July 1943 the squadron moved to Merauke airfield in Dutch New Guinea and undertook anti-submarine patrols, convoy escorts, and missions in concert with the Australian Army. The unit returned to Australia 12 months later and became non-operational. Re-equipped with ten (Consolidated) Liberator (four engined heavy bomber) aircraft, the squadron was reactivated on 3 February 1945. Joining forces with other RAAF squadrons, the unit bombed Japanese positions and shipping in the seas around Timor and Banda.