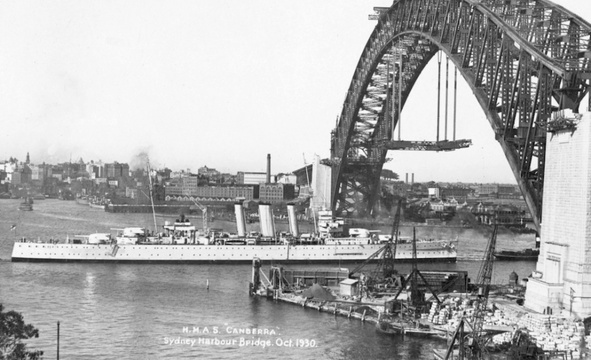 This extract from the RAN web site.

HMAS Canberra (I) was one of two 10,000 ton County Class heavy cruisers ordered by the Australian Government as part of a five year naval development program begun in 1924 and completed in 1929. She commissioned at Clydebank on 9 July 1928, two months after her sister ship, HMAS Australia, under the command of Captain George L. Massey RN.

She was built to the Kent Class design of County Class cruisers, her sister ships being HMAS Australia and HM Ships Kent, Berwick, Cornwall, Cumberland and Suffolk.

HMAS Canberra (I) was part of a US naval force deployed in support of the US campaign on Guadalcanal in the Solomon Islands in August 1942.  One of the other ships in Task Force 44 was the USS Chicago, which was the  target of Japanese midget submarines during the infamous raid on Sydney Harbour on 31 May / 1 June 1942.  The Canberra's sister ship HMAS Australia was also in company.

A Japanese force attacked a combined Allied force at night on the evening of 9 August 1942.  Known as the Battle of Savo Island, the Japanese ships had been detected by two RAAF Hudson patrol bombers but this critical information was not relayed to the Allied Naval force.

The Japanese lacked the radar that the USN ships had, but their use of the element of surprise, searchlights and their every effective "Long Lance" torpedoes decided the battle in their favour.  Sinking three US Heavy cruisers (the Vincennes, Astoria and Quincy), the Japanese ships also crippled Canberra by several torpedo hits and some very effective salvoes of 8 inch shells causing her to lose power and catch on fire.

She was damaged to the point that she had to be abandoned and sunk the following day by other ships in attendance.  Over 500 Allied shells were poured into the listing hulk before another torpedo finished her off.

There were 193 casualties amongst the 819 personnel serving in Canberra on 9 August 1942, including the Captain, Commander Frank Getting who had refused to leave his post but subsequently died of his wounds.

The area in which the battle took place was nick-named "Iron Bottom Sound" as more than 30 Allied ships were lost in the area.