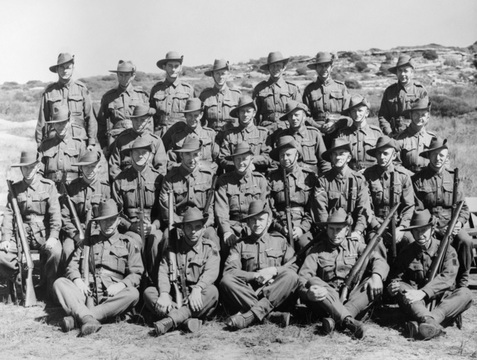 Garrison Battalions were part of the Australian Army Reserve with the role of manning fixed defences and vulnerable points. The personnel were Class B men, those between 48 and 55 who had seen war service before September 1939, therefore mostly WW1 veterans. Prisoner-of-War and Internment Camp units were part of the Garrison Battalion organisation but were on a special establishment where the need for prior war service was waived and females were sometimes included.

Initially, all Garrison Battalions wore the same shoulder patch, a black square on a green square. Numerous requests were made by battalions to individualise their patches and in late 1942 the system was adopted of geometric shapes, green on black in a reversal of the original design, approval for which was dated 11 December 1942. Source (www.iwm.org.uk)