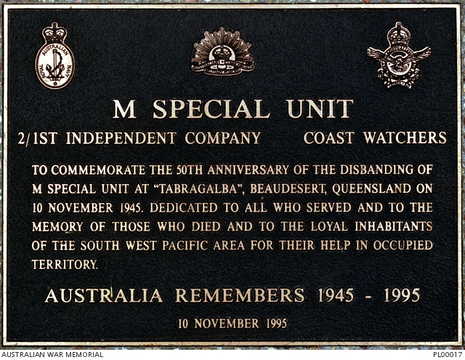 One of two 'special units' Australia raised during World War Two (with  Z Special Unit (/explore/units/581) been the other,) 'M' Special Unit was an Allied special forces reconnaissance team under command of the Services Reconnaissance Department (SRD.) It was the successor of the already highly successful Coastwatchers unit. Raised in Queensland, Australia in 1943 the unit operated behind enemy lines for long periods of time in the Pacific theatre of combat mainly collecting intelligence such as enemy troop movements and shipping details. It was disbanded at the end of the war in 1945.

After training on Fraser Island in 1943, “M” Special soon deployed where they operated in both the Solomon Islands and New Guinea conducting intelligence operations against the Japanese. The late 1943 the unit was split into smaller units code named ‘Whiting’ and ‘Locust’ where both units continued to collect intelligence. Generally, a very successful unit the consequences for those captured by the enemy were serve as demonstrated by the most infamous member of “M” Special Unit Sergeant Leonard Siffleet who was executed by Japanese forces via beheading.