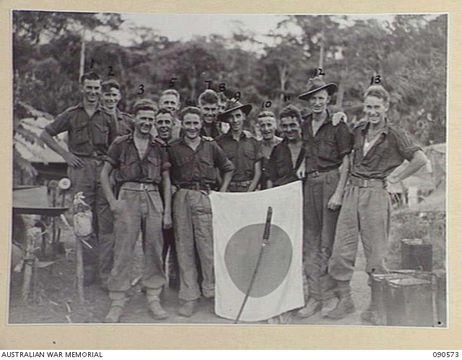 The 2/3rd Battalion was raised at Victoria Barracks, Sydney on 24 October 1939 as part of the 16th Brigade of the 6th Australian Division. It relocated to the newly-opened Ingleburn Camp on 2 November where it conducted its basic training. On 10 January 1940, it sailed from Sydney and disembarked in Egypt on 14 February.

After further training in Palestine and Egypt, the 2/3rd took part in its first campaign - the advance against the Italians in eastern Libya - in January 1941. It was involved in the successful attacks at Bardia (3-5 January) and Tobruk (21-22 January), and remained as part of the Tobruk garrison when the advance continued. One company of the 2/3rd was also employed to garrison Derna after its capture by the 19th Brigade on 30 January. The 2/3rd left Tobruk on 7 March, ultimately bound, with the rest of the 6th Division, for Greece.

Arriving in Greece on 19 March, the 2/3rd was soon deployed north to resist the anticipated German invasion. It occupied positions at Veria on 7 April, but a succession of withdrawals by the Allies in Greece meant that the battalion did not meet the enemy in battle until 18 April - at Tempe (Pinios) Gorge. There, the 2/3rd supported the 2/2nd Battalion and blocked German movement through the gorge, allowing the unhindered withdrawal of Allied forces further south. The 2/3rd itself was forced to withdraw again by nightfall. Its activities in Greece ended with evacuation by sea from Kalamata on 27 April. The bulk of the battalion returned to Palestine, via Egypt, but one group of 141 troops subsequently fought with the 16th Brigade Composite Battalion on Crete, after the transport carrying them away from Greece was sunk.

In June and July 1941, the 2/3rd took part in the campaign in Syria and Lebanon and fought around Damascus (20-22 June), in an unsuccessful effort to secure Jebel Mazar (24-28 June), and in the climactic battle of Damour (6-10 July). The battalion was destined to remain in Syria as part of the garrison there until January 1942. It left the Middle East, heading for the war against Japan, on 10 March 1942. The 16th and 17th Brigades, however, were diverted on the voyage home. Between 27 March and 13 July they defended Ceylon (present-day Sri Lanka) from possible Japanese attack. The 2/3rd finally disembarked in Australia, at Melbourne, on 8 August 1942.

The 2/3rd's first campaign against the Japanese was the advance along the Kokoda Trail to the Japanese beachheads between September and December 1942. It fought major engagements at Eora Creek (22-28 October), Oivi (5-12 November), and on the Sanananda Track (21 November-19 December). 1943 and 1944 were spent training in northern Queensland, and the 2/3rd's last campaign of the war was the operation to clear the Japanese from the Aitape-Wewak region of New Guinea between December 1944 and August 1945.