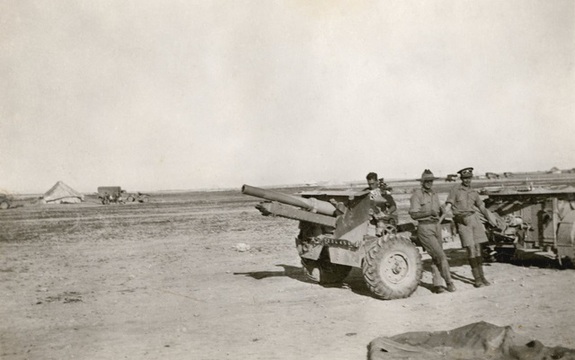 The 2nd/3rd Field Regiment was formed on 1 November 1939 at Wayville, South Australia.  Its men were drawn from all six Australian states and the Northern Territory.

The majority of the officers and non-commissioned officers were appointed from the Militia who had volunteered for service overseas in the 2nd AIF.

South Australian recruits comprised the largest intake draft and were organised into a complete subunit,  5 Bty, while recruits from the other states were allocated to the 6 Bty.  The regiment began basic training at Woodside Camp during November, before moving to Ingleburn, New South Wales, the following month, where more involved training was undertaken. Basic equipment and vehicles were received at this time, but no guns were available to be issued.

The regiment embarked on HMT Queen Mary bound for the Middle East, in May 1940. En route, the convoy was diverted to the United Kingdom following the German invasion of France.   Arriving there in June, the regiment joined other elements of the Second Australian Imperial Force in the United Kingdom.  Established at Tidworth Camp in Wiltshire, and then later at Colchester, the regiment was employed on garrison duties to defend against a potential German invasion following the Fall of France.

During this time, it was partially broken up to provide personnel to fill out newly forming Battalions of what ultimately became the 25th Brigade of the 7th Division; the 2/31st, 2/32nd and 2/33rd Infantry Battalions. Shortly after this, the regiment became the first Australian artillery regiment to receive the 25-pounder guns and their Morris gun tractors.

By November 1940, the imminent threat of invasion had receded, and the regiment embarked for North Africa aboard the HMT Empress of Canada.  Arriving in late December, the regiment was assigned to the 6th Division, and was quickly in action against the Italians at Tobruk where they supported the 19th Infantry Brigade. Benghazi fell next and after that was taken, the regiment deployed one of its  batteries forward in support of the 17th Infantry Brigade at Marsa Brega. A short time later, though, the regiment was withdrawn back to Ikingi Maryut to re-organise.

In early April 1941, the regiment was deployed as part of ‘Opeation Lustre’, the defence of Greece.  Arriving on 6 April, the regiment was moved forward towards the Yugoslav border and tasked to defend Vevi in the Florina Valley.  They became the first Australian artillery unit to engage German forces during the war.  They inflicted heavy losses on an SS force on the Itia–Vevi road.  Relentless pressure mounted and in driving snow, the regiment fought a desperate rearguard effort around the Klidi Pass, where it was obliged to fire over over open sights at advancing German infantry.  Their withdrawal hampered by thick mud, the regiment came under attack from German fighter-bombers.

A disastrous series of withdrawals followed in which the regiment lost most of its equipment. A week later, further withdrawals had taken them towards Elasson, where the regiment found itself supporting the 6th New Zealand Brigade. On 18 April, the fighting was so intense that the regiment's guns fired over 6,000 rounds in a twenty-four-hour period as it attempted to thwart the advance of a German armoured column near Mount Olympus.  Later the regiment supported the 4th New Zealand Brigade around Erithrai. Finally, on 27 April the regiment was evacuated from Greece on board HMS Ajax and withdrawn back to Crete.

The regiment was initially assigned as a makeshift infantry unit to carry out garrison duties, but in early May the regiment was re-equipped with captured Italian and French artillery including 75 mm and 100 mm guns, and  assigned a coastal defence role.  It relocated to Georgiopolis, on the south-east coast of Suda Bay, where the men set to work digging-in in the hills overlooking the beach.   When German paratroops landed on 20 May, the regiment was transported to Maleme airfield, less a battery detached to Retimo.  In these locations the regiment supported the 19th Infantry Brigade, while around Meg Khorafia some of the regiment's personnel were thrown into the line as infantry.   Around Galatas, as the Germans pressed hard against the Australian and New Zealand defences, the regiment found itself holding the line as the infantry fell back, and as the guns fired over open sights, the gunners defended themselves with small arms.

Later as the Allies withdrew towards Sphakia, to prevent most of its equipment falling into enemy hands, the regiment destroyed it. Two of the captured 75 mm guns were saved, though, and were manpacked by men from 'B' Troop over mountainous terrain to act in a rearguard role between Sphakia and Suda, while the Royal Navy attempted to evacuate the stranded troops.  The regiment continued to fight until it was withdrawn by sea on 31 May, leaving behind 129 men who were captured by the Germans.  Amongst these were the men from 'B' Troop, who had formed the rearguard protecting the evacuation beach. After the departure of the last transport ship, they attempted to evade capture but were eventually rounded up by German patrols.

The regiment's total losses for Greece and Crete were 27 killed and 47 wounded, in what was the most frenetic fighting experienced by any of the Australian Field Regiments.

The regiment remained in the Middle East until February 1942 when the 2nd AIF less the 9th Division, was recalled back to Australia in response to the growing threat posed by Japan's entry into the war.  Arriving in Adelaide in March 1942,  the regiment was based in the Adelaide Hills until transferred to Townsville by rail in May 1942.  That would have been an excruciatingly slow journey with two changes of railway gauge to contend with. There, the regiment was reallocated to the 5th (militia) Division and assigned a coastal defence role in Cairns, operating antiquated 18-pounder guns.

In June 1943 the Regiment reverted to under command of the 6th Division and by this time had been re-equipped with 25 pounder guns including some of the new Short 25 pounders, adapted for jungle warfare. It remianed in Queensland until late 1944, when it moved to the north coastof New Guinea to support the 19th Brigade in the 6th Division's Aitape - Wewak campaign.  It was equipped with four 4.2 inch mortars and a pair of 155mm 'Long Tom' guns to augment the 25 pounders for specialist applications.

The regiment saw action right up until the end of the war, and had the distinction of firing the last fire mission in the New Guinea campaign, when on 15 August, it fired 1,000 rounds on "six regimental targets" eight hours after Japan's surrender to deal with a Japanese artillery unit that was continuing to hold out.

Following the conclusion of hostilities, the regiment returned to Australia for demobilisation and was eventually disbanded at Puckapunyal, Victoria, on 18 January 1946.

The regiment had lost 46 men killed in action or died of wounds / accident, 49 wounded and 130 captured out of a total of 1,887 men who served in its ranks.