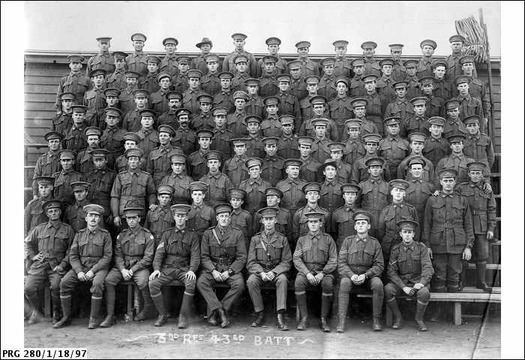 The Battalion colour patch's oval shape indicates it is of the 3rd Division, the pale blue lower half indicates it is of the third brigade in the division, in this case the 11th Brigade.  The other two were the 9th (NSW) and 10th Brigades (Vic / Tas).   There were four battalions in each brigade; in this case the 41st, 42nd, 43rd and the 44th Battalions.  As the third Battalion in the Brigade the upper half of the colour patch is brown.

The 3rd Division formed in the UK, on the Salisbury Plain.  Its Commander was to be General John Monash.

The Battalion left Australia in June 1916, briefly stopped over in Egypt, and then arrived in England for more training in July 1916 where it suffered a mumps epidemic. The 3rd Division moved to the Western Front in December 1916, following an extended period of training in the Salisbury Plain in the UK.  It was engaged in trench warfare during the first half of 1917.

The 3rd Division's first major action as a formed whole was at Messines on the 7th June 1917, with the 4th Division in Reserve.  Later it fought during the the Third Ypres campaign at Menin Road, Polygon Wood, Broodseinde Wood and Poelcapelle.  In 1918, the Battalion held the line as part of its parent Brigade against the German Spring Offensive, being awarded a Battle Honour for its work along the line of the River Ancre down towards Villers-Bretonneux and, on 4th July at Le Hamel.  It was also heavily engaged in the "Last Hundred Days" campaign, from Amiens to the Hindenburgh Line.

On 2 September 1918, T/Corporal Lawrence Weathers was awarded the VC for actions in the 3rd Division flanking operation north of Mont St Quentin.  Tragically he was mortally wounded, and his uncle with him, four weeks later near Louverval.  Lawrence Weathers died of his wounds on 29 September 1918.  In total, 386 men of the Battalion were killed in action and 1,321 were wounded.