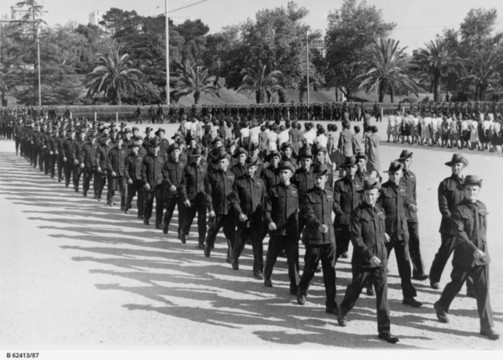 This is a generic listing covering personnel in SA recorded against the Volunteer Defence Corps (VDC) but without an explicit Battalion affiliation.  If looking for an individual soldier, Users should consult the separate Battalion listings listed below for the 10 SA VDC Battalions.  The Volunteer Defence Corps (VDC) was an Australian part-time volunteer military force of World War II modelled on the British Home Guard.

The VDC was established in July 1940 by the Returned and Services League of Australia (RSL) and was initially composed of ex-servicemen who had served in World War I. The government took over control of the VDC in May 1941, and gave the organisation the role of training for guerrilla warfare, collecting local intelligence and providing static defence of each unit's home area. General Harry Chauvel, who had retired in 1930, was recalled to duty in 1940 and appointed Inspector-General of the VDC. Chauvel held this position until his death in March 1945.

A ready made base for the VDC were the Australian rifle clubs under the banner of the National Rifle Association, which was then associated with the Department of Defence. Rifle club members were highly skilled rifle men, well versed in the handling of firearms and ready for the task involved. Every Australian town of any significance has boasted at least one rifle club.

QLD / 1MD  - 1-23 Battalions  - some of the soldiers were 'shadow posted' to  Searchlight,  Anti Aircraft and Coast Defence Batteries )

Battalions were further split into Companies and Platoons eg: