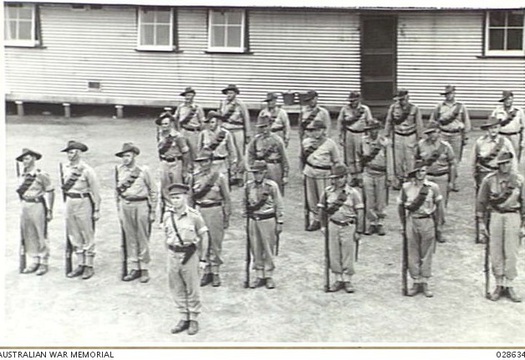 23rd Garrison Battalion provided security at the Murchison PoW Camp near Tatura in Victoria, where there were a series of Internment and PoW camps during WW2.

Approximately 4,000 Prisoners of War, mainly Italians and Germans were detained at Camp 13 Murchison POW Camp in the Tatura District of Victoria during World War 2. Some Japanese POW's were moved to Camp 13 after the Cowra Breakout in 1944.

Initially, all Garrison Battalions wore the same shoulder patch, a black square on a green square. Numerous requests were made by battalions to individualise their patches and in late 1942 the system was adopted of geometric shapes, green on black in a reversal of the original design, approval for which was dated 11 December 1942.

The 23rd Garrison Battalion was re-designated later in the War as the 'Murchison POW Group' and had incorporated some of the men of the 50th and 51st Garrison Companies, which had been created when the 24th Battalion had been disbanded.