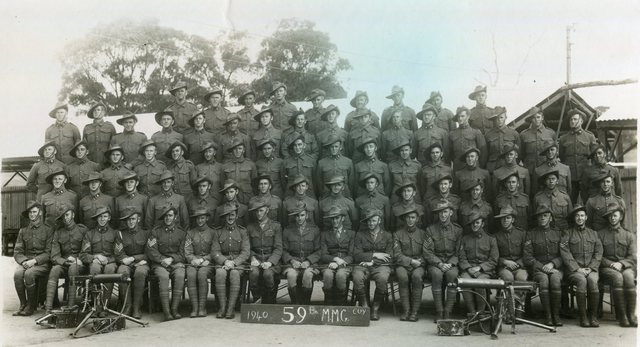 This history is sourced in part from the AWM and Wikipedia.

After the First World War the defence of the Australian mainland lay with the part-time soldiers of the Citizens Military Force, also known as the Militia. The Militia was organized to maintain the structure of the First AIF and kept the same numerical designations.  However there was simly not the manpower to maintain the original AIF organisation and structure.

When Japan entered the Second World War on 7 December 1941, the 58th and 59th were training at Seymour in Central Victoria. At the end of March 1942 the 15th moved to Albury and in the third week of May moved to Casino and South Grafton in northern NSW for their first operational role - the defence of the Tweed Valley and the adjacent coastline. On 27 August 1942, the 58th and the 59th were merged, forming the 58th/59th Infantry Battalion. About half the men from the 59th were sent to the 57th/60th, while half the men from the 58th were reassigned. Meanwhile, the 15th Brigade was in the process of moving to Caboolture, north of Brisbane. In December the 58th/59th moved to Cooroy, where it carried out further training in anticipation of active service.

The Militia was limited by Australian legislation to defence of the homeland and its territories.  Its ranks had been bolstered by conscription for Homeland defence only, whereas the 2nd AIF was a volunteer only force specoifically raised for overseas service.

In 1943 the 3rd Division moved to New Guinea, (it and the adjacent islands had been classified as 'Territories' and as such militia units could be deployed there)  with the 58th/59th arriving at Shrapnel Valley, near Port Moresby, in March. The division's ultimate destination though was the Lae-Salamaua front. At the end of May the 58th/59th was flown to Wau and Bulolo and by 1 June the troops had gathered at Bulwa. On 19 June the battalion set out on foot along the difficult Missim Trail to take up position on Bobdubi Ridge.

On 30 June the 58th/59th attacked Bobdubi Ridge. The fighting was fierce. The Japanese poured machine-gun fire from fortified and camouflaged positions but the battalion managed to secure a position on the ridge within two days. From there they were able to wear down the Japanese and eventually captured Old Vickers position on 28 July. Old Vickers was the key to the ridge and its capture opened the way to Salamaua. The Australians captured Salamaua on 11 September and Lae fell on 16 September.

A brief respite followed and the 15th Brigade moved to Port Moresby and the Donadabu Highlands behind the city. The 58th/59th had been in continual contact with the Japanese for 77 days and the rest was certainly appreciated.

In early-1944 the 15th Brigade returned to the front, this time to Dumpu in the Ramu Valley, under the command of the 7th Division. The brigade supported the clearing of the Ramu Valley and the advance on Madang, which was captured on 24 April. After almost a year-and-a-half in New Guinea the 15th Brigade finally returned to Australia in August. The brigade had marched over more of New Guinea than any other Allied formation.

After some leave, the brigade regrouped on the Atherton Tablelands in Queensland in October. It was only a brief stay. The 3rd Division had already moved to Bougainville and the brigade followed.

The 15th Brigade took over Bougainville's Southern Sector from the 7th Brigade in mid-April 1945. In order to continue the Australian advance to Buin, known as the "battle of the rivers", the 15th Brigade moved forward on a two-battalion front. The 57th/60th moved along the Commando Road, known as the north axis; the 24th and 58th/59th leap-frogged along the Buin Road, the south axis. The 24th took up position at Kero Creek, leading the 58th/59th further behind at Barara. On 17 April the 24th opened the brigade's attack by crossing Dawe's Creek and by 7 May reached the Hongoria River. The 58th/59th followed the 24th and assumed lead at the river. In the meantime, the 57th/60th had also reached the river along the north axis. The 15th brigade reached the Mivo River at the end of June and was relieved by the 29th Brigade on 1 July.

With the war over, the ranks of the 58th/59th thinned, as men were discharged or transferred. The battalion was disbanded on 23 February 1946.

Compiled by Keith Harrison with subsequent edits by Steve Larkins