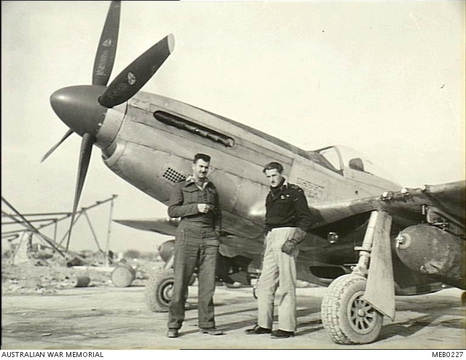 3 Squadron dates to its pre-cursor Australian Flying Corps Squadron of WW 1 which is featured separately.  It disbanded after WW1 but was re-formed following the creation of the RAAF in 1921; 3 Sqn itself was raised in 1925 and persists to the current day as a frontline fighter squadron.  It began WW II at RAAF Richmond west of Sydney and was despatched to the Middle East in support of the 6th Division.

It was equipped initially with Gloster Gladiator and Hawker Hurricanes and later with US-built Curtiss P40 Tomahawk and Kittywawk fighter aircraft.

3 Squadron became part of the RAF's 'Desert Airforce' . It was initially aligned with sister units 450 and 451 Squadrons of the RAAF which were raised as Article XV squadrons under the Empire Air Training Scheme.  These three squadrons are commemorated together at the RAAF Memorials complex in Adelaide  (/explore/memorials/79)

3 Squadron was to serve throughout the  War in the Mediterranean theatre initially in North Africa and later based in Italy operating over the peninsula, the Adriatic Sea and the Eastern Balkans.  It was equipped for most of the war with P40 variants converting to the North American P51D Mustang late in the war.