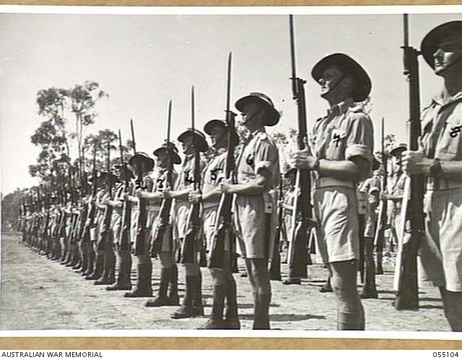 The 10th and 48th Militia Battalions had very famous WW1 antecedents and continued the proud traditions during the interwar years.  When mobilisation occurred after the outbreak of war in 1939, 'Eligible Males' were drafted into the Militia.  The criteria changed as the threat  level escalated.  Many of these men subsequently transferred to teh AIF or RAAF.

In mid-1942, as a result of serious manpower shortages in the Australian economy that occurred because of an over mobilisation of its population base, the Australian government decided to wind back the number of service personnel to free up manpower to return to the civilian workforce.  The Army was 'over-recruited, particlarly the Home Defence  / CMF / Militia into which men of eligible age had been drafted.

In order to achieve this outcome, a number of Militia (CMF) infantry battalions were disbanded while others were merged. The 10th and 48th Battalions were thus merged.

Gazetted as an AIF unit in 1943. Despite this, however, it never saw service outside of Australia.  It spent most of the latter part of the war in and around Darwin in the NT.