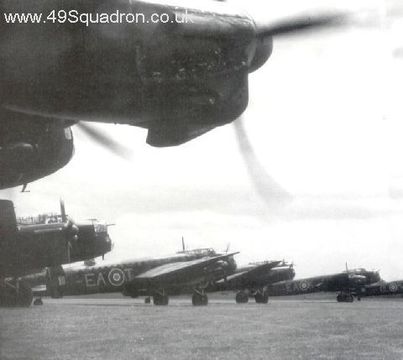 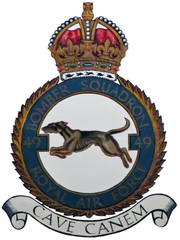 No. 49 Squadron is included on this site as one of the many in which RAAF personnel served fought and died during WW2.

No. 49 Squadron was raised during WW1 and remained in service more or less continuously until it was finally disbanded in 1965 at which time it was equipped with the Vickers Valiant jet bomber forming part of Britains deterrent force of 'V' Bombers;  the Avro Vulcan, Vickers Valiant and Handley Page Victor.

On 10 February 1936, No. 49 Squadron re-formed at Bircham Newton in Norfolk, from a nucleus provided by 'C' Flight of No 18 Squadron. It was equipped with Hawker Hind light bombers and initially commanded by Flt Lt J C Cunningham. It moved to Worthy Down in August 1936 where its official badge, depicting a racing greyhound surmounting the motto 'Cave Canem' (Beware of the Dog), was presented on 14 June 1937.

At first the badge seems inappropriate for a bomber squadron but it is in fact indicative of the performance of the Hawker Hind when compared with its contemporaries. A move to RAF Scampton in Lincolnshire in March 1938 was followed by conversion to the Handley Page Hampden, the first unit to be equipped with the type.

During WW2 Throughout 1941 many targets were attacked; ports, industrial centres, shipping, marshaling yards and airfields. In March 1942 the squadron took part in a particularly successful attack on the Renault works at Billancourt, Paris.

The squadron began to re equip with twin engined Avro Manchester aircraft in April 1942; however, these aircraft were not in use for long because of issues with their Rolls Royce Vulture engines and by July 1942 were replaced by Lancasters which, with faster speed greater range and prodigious bomb load, albeit arguably light on in self protection,  extended the range and scope of the squadron's operations.

On 17 October 1942 the squadron flew deep into France without escort and attacked the Schneider works at Le Creusot. Italy could now be reached and 49 Squadron's first operation in that theatre was an attack on the harbour at Genoa on 22 October 1942.

The Squadron stood down from 1-15 January 1943 during which time a move was made to Fiskerton. Operations resumed on 16 January when the squadron attacked Berlin the first of many such raids.

For the remainder of the war the squadron continued as a front line bomber squadron and took part in most major operations by Bomber Command including, in August 1943, the vital attack on the rocket research establishment at Peenemunde when the squadron lost four of the twelve Lancasters despatched.