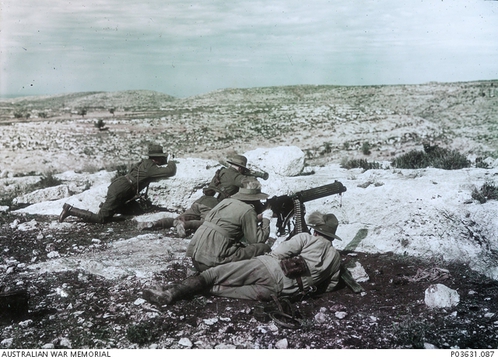 Originally established as Machine gun sections in each Regiment of Light Horse, the sections were later amalgamated under Brigade control in much the same way as occurred with Machine Gun Companies amalgamating to form Battalions in the AIF.  So each Light Horse Brigade had a Machine Gun Squadron established under Command to best provide fire support, equipped with Vickers medium machine guns.

The soldiers in the Squadron were drawn from the three Regiments of the Brigade and supported the Brigade and its subordinate units throughout the Egypt and Palestine campaigns 1916-18.

In the main photograph the gun is receiving range data fromn the soldier equipped with the tubular device which is a steroscopic range finder.