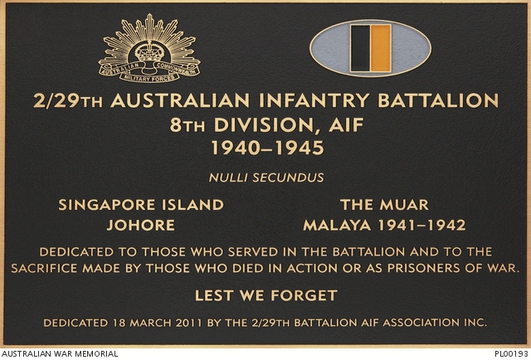 The 2nd/29th Battalion raised as part of the 2nd AIF with which Australia was to fight WW2 as its key ground force component.  The 2nd/29th was raised in 1940 at Bonegila near Albury Wodonga in Victoria to form  part of the 27th Brigade in the ill-fated 8th Division.  The 27th Brigade was the last to be raised for service in WW2.

The battalion did its initial training at Bonegilla before travelling to Bathurst in NSW at the end of February 1941. The 2/29th remained at Bathurst for the next five months. At the end of July it sailed with the rest of the brigade to Singapore, arriving on 15 August. In the second week of September the 2/29th travelled to Segament in Malaya, where it continued its training. The battalion would soon put what it had learnt into practice.

Japanese forces landed at Singora and Patani in Thailand, and Kota Bahru in northern Malaya, just before midnight on 7 December. By 15 January they had reached Muar River, in northern Johore. The area was defended by an inexperienced and poorly trained Indian brigade and the 2/29th and the 2/19th Battalions were sent to Muar as reinforcements. The 2/29th reached Bakri on 17 January and assumed defensive positions. The Japanese attacked the next day. The fighting was fierce but the battalion and the 2/4th Anti-Tank Regiment destroyed several Japanese tanks. In the meantime, the 2/19th had arrived at Parit Sulong, south of Bakri, having fought its way through the Japanese beginning to encircle the 2/29th.

The 2/19th attacked along Muar Road on 19 January and held a vital crossroad long enough for the 2/29th and Indians units to withdrawal. However, the Japanese had already outflanked the 2/19th position and the Australians and Indians began to withdraw towards Parit Sulong the next morning. Constantly harried from the rear and the air, the force fought its way through a succession of Japanese roadblocks but was halted by strong positions around the bridge across the Simpang Kiri River at Parit Sulong. With its ammunition exhausted, casualties mounting, and no chance of relief, the combined Australian-Indian force struck out through the jungle for Yong Peng on the morning of 23 January. The force had to leave their wounded behind - about 110 Australians and 40 Indians (described by a witness as a "maimed and bloodstained"). Almost all were massacred by the Japanese.

Two hundred and seventy-one men from the 2/19th reached the British lines at Yong Peng, but only 130 from the 2/29th made it.

The remaining men were withdrawn to Johore Bahru and then Singapore Island. Despite their heavy losses, both battalions were ordered to be ready for battle again within a few days.

After Bakri, the 2/29th was reinforced with 500 men - many of whom had only recently arrived from Australia - and subsequently fought as part of the defence of Singapore. However, they could not stop the Japanese and on 15 February the British commander on Singapore surrendered.

The 2/29th spent the next three-and-a-half years as prisoners of war. Concentrated in Changi goal, the battalion was used to supply labour for work parties, first in Singapore and then in other parts of Japan's Greater East Asia Co-prosperity Sphere. Men were sent to Burma and Thailand to work on the railway, while others were sent to Java, Sumatra, Borneo, and Japan.

Like their comrades in the other units of the 8th Division they suffered large numbers of casualties due to the horrendous conditions to which they were subjected by their captors.  Disease, starvation, physical and psychological abuse all took their toll both during the war and for the rest of their often foreshortened lives.