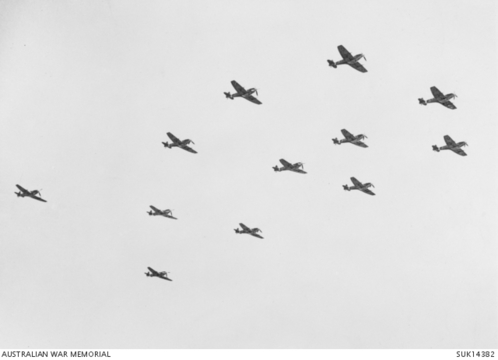 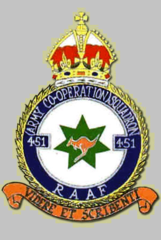 The following information is an extract from a Wikipedia entry

The image is available at ADF Serials site http://www.adf-gallery.com.au/gallery/albums/451-Hurricane see link below

Like 450, it was a so-called Article XV squadrons raised underthe Empire Air Training Scheme.  it was intended that the squadron would serve overseas as part of the Royal Air Force (RAF).   The squadron's personnel departed Sydney on 9 April on board the ocean liner Queen Mary and arrived in Egypt on 5 May.

The situation facing Allied forces in the regionwas one of undersupply of aircraft.  This meant that as 451 was forming, all available aircraft were allocated to the experienced squadrons in theatre engaged in combat, so none could be spared for the new arrivals.  It was not until 1 July 1941 that No. 451 Squadron took over Hawker Hurricane fighters and other equipment at Qasaba from an RAF unit.   The squadron also apparently acquired some Westland Lysander aircraft.[1]

The squadron began flying operational missions on 1 July 1941. As an army cooperation unit its main duties were photographic, tactical reconnaissance and artillery spotting.

From 13 September No. 451 Squadron maintained a detachment of two pilots and two aircraft in the besieged Libyan town of Tobruk to support the Allied garrison; this detachment remained until the siege was lifted in December; during this period several Hurricanes were shot down by Axis fighters.

The remainder of No. 451 Squadron was attached to XIII Corps and participated in Operation Crusader during November and December 1941. The squadron frequently operated from airstrips near the front line, and some of its personnel were captured on 26 and 27 November when German forces attacked the airstrip at Sidi Azeiz.  All but three of these men were liberated when Bardia fell to the South African 2nd Infantry Division on 2 January 1942. Following the conclusion of Operation Crusader No. 451 Squadron was withdrawn from operations for refit.

In February 1942 No. 451 Squadron was deployed to Syria to operate with the Ninth Army. From March the squadron also maintained a detachment at Cyprus to counter German reconnaissance flights over the island and in June it took over responsibility for providing air defence to Haifa.  As there were more Army cooperation units in the Middle East than were required and the Australian Air Board would not agree to convert No. 451 Squadron to a fighter unit, it saw little action during 1942.  As a result, the squadron's morale deteriorated and suffered a widespread loss of morale and combat effectiveness".

No. 451 Squadron was transferred to Mersa Matruh in Egypt on 8 January 1943 and redesignated a fighter squadron. The squadron was responsible for air defence of the Nile Delta and nearby convoys.  It was partially equipped with  Supermarine Spitfire fighters for high-altitude interceptions. Aircraft from the squadron saw combat on only one occasion during the first six months of 1943 and morale remained low.  No. 451 Squadron's only offensive action during the year was a raid against Crete on 23 July in which it contributed six Hurricanes to a force of Beaufighter heavy fighters and Baltimore bombers of which three were lost.

After being completely re-equipped with Spitfires in early 1944, No. 451 Squadron was transferred to Corsica and arrived there on 18 April. This move was very popular with the squadron's pilots as it gave them an opportunity to participate in offensive action. The squadron's role was to support Allied operations in Italy and southern France by escorting bombers and conducting armed reconnaissance patrols.  It flew its first operation from Corsica on 23 April and engaged German fighters on a number of occasions. In mid-June the squadron supported the Free French-led Invasion of Elba. On 12 June eight personnel were killed and all but two of No. 451 Squadron's Spitfires were damaged when 25 German Ju 88 bombers raided the unit's base at Poretta airfield. The squadron's ground crew were able to get ten Spitfires serviceable by the following day.

After a brief deployment to th Italian mainland, No. 451 Squadron was transferred to the United Kingdom leaving its Spitfires behind.

On arrival in the UK,  451 Squadron was issued with Mark XVI Spitfires and based at RAF Hawkinge in Kent from 2 December 1944. It began flying combat operations in early 1945 and was initially used to escort RAF Bomber Command heavy bombers and No. 2 Group RAF medium bombers during daylight raids.

From 14 February the squadron was based at RAF Matlaske with 453 Squadron RAAF against V-2 rocket launch sites and railway targets in the Netherlands. From 20 March 1945 the two squadrons were mainly focused on attacking German transportation targets after the V-2 campaign against the UK ended.  As the war in Europe draw to a close No. 451 Squadron's activities decreased, and it flew its last attack sorties from the UK on 3 April. The squadron flew only 61 operational sorties for the remainder of April and none in May.

Following the end of the war No. 451 Squadron was deployed to Germany as part of the British occupation force. It was intended that No. 451 and No. 453 Squadrons would form a long-term Australian contribution to the occupation of Germany, but insufficient RAAF personnel volunteered for this duty to make the deployment viable. 451 Squadron was disbanded at Wunstorf on 21 January 1946. During the war the squadron suffered 28 personnel killed, 18 of whom were  Australians.

A comprehensive listing of base locations commanding officers etc is detailed on the Wikipedia page compiled for each Squadron.

See the links in the sidebar.

3, 450 and 451 Squadrons are commemorated on the RAAF Memorials complex at Torrens Parade Ground, in Adelaide's CBD - LINK (/explore/memorials/79)