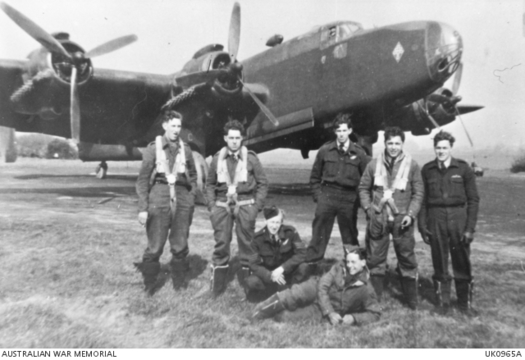 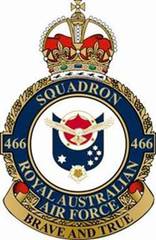 466 Squadron was an Article XV squadron formed under the Empire Air Training Scheme in late 1942 at RAF Driffield in Yorkshire England.  It was designated as a night bomber squadron attached to RAF Bomber Command from the outset.   Initially the Squadron was manned with personnel from across the Commonwealth;  it was only towards the end of the war as replacement crews were predominantly Australian that a majority of its personnel were members of the RAAF.

The Squadron was initially equipped with Vickers Wellington medium bombers, and it transferred to RAF Leconfield, also in Yorkshire, on 27 December 1942 and flew its first mission on 13 January 1943.

466 Sqn converted to the Handley Page Halifax four engined heavy bomber in late 1943. In June 1944, the squadron returned to Driffield. From May 1944, operations were focussed on German infrastructure in France, such as coastal artillery batteries pre D Day and railway marshalling yards, in preparation for the invasion of Europe.

Flying Officer Joe Herman (RAAF), the captain of a 466 Sqn Halifax B.Mk.III, narrowly escaped death in a remarkable incident on 4 November 1944.  During a night mission over Germany, his aircraft (LV936, "HD-D"), was badly damaged by Flak. After ordering the crew to bail out, Herman was blown out of the plane, without a parachute. After falling a long way, possibly more than 3,000 metres, Herman fell onto the Halifax's mid-upper gunner, F/O John Vivash (RAAF), and grabbed one of his legs. Both men descended on one parachute, suffered minor injuries when landing and survived the war as prisoners of war. From a total crew of seven, only one other airman, Sgt H. W. Knott (RAF), survived. According to one source, at least three crew members were murdered after being captured by civilians on the ground.

In May 1945, following the end of the war in Europe,466 Squadron began re-training at RAF Bassingbourn, in Cambridgeshire, as a transport unit. Some sources state that the squadron was renumbered as No. 10 Squadron RAAF on 20 June 1945, while others say the squadron operated as a combined unit with No. 10 Sqn.  It was re-converting to Consolidated Liberator heavy bombers when Japan surrendered, whereupon the squadron was disbanded at RAF Bassingbourn on 26 October 1945.

Like to contribute?
We would particularly like to encourage individual historians researchers or members of unit associations to contribute to the development of a more detailed history and photographs pertaining to this unit and its members.