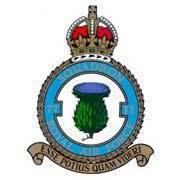 77 Squadron RAF is listed on this site because it was one of many RAF units in WW2 to which RAAF personnel were posted, and in which they flew and died in service.   Aircrew were trained via the Empire Aircrew Training Scheme which was specifically created to generate the aircrew from candidates drawn from around the Commonwealth, that Britain knew it would need to take the fight for Europe to Germany

It reformed on 14 June 1937, as a bomber squadron, as a result of increasing tension arising from Nazi militarism.  Based at RAF Finningley it was 'spawned' from 102 Squadron and in 1938 the squadron moved to RAF Driffield, as part of 4 Group in Bomber Command, flying Armstrong Whitworth Whitleys.  It tranferred to Coastal Command in May 1942 and was engaged in anti-submarine patrols, based at RAF Chivenor.

In October 1942, the squadron converted to Halifaxes at RAF Elvington and re-located to RAF Full Sutton in May 1944.

On 8 May 1945 the squadron joined Transport Command, and in July 1945 re-equipped with Douglas Dakotas.

77 Squadron was assigned to India in October 1945 after the end of WW2 in the Pacific / SE Asia.  The squadron was disbanded on 1 November 1946.

It was reformedback in the UK in December 1946 and operated Dakotas during theBerlin Airlift, and then disbanded yet again on 1 June 1949 at RAF Waterbeach.

It underwent another iteration in the late 1950s until 1963, equipped with Thor Intermediate Range Ballistic Missiles.