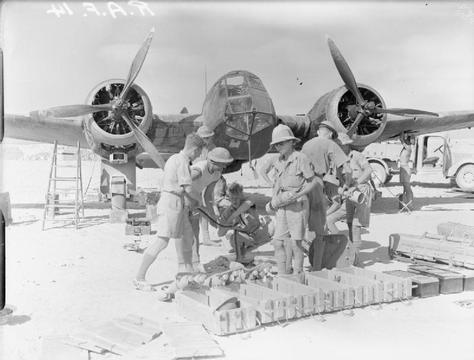 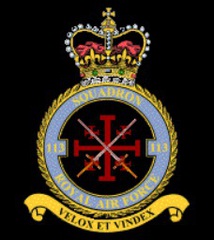 113 Squadron RAF is included in this site because it is one of many RAF Squadrons in which RAAF personnel served,fought and died during WW2.

The following historical narrative is derived from the 113 Squadron Association site.  Click the link for the full history.

No. 113 Squadron was formed on 1 August 1917 at Ismailia as a corps reconnaissance unit. In September it began tactical reconnaissance and artillery spotting missions in Palestine flying RE8s against the Turkish 7th and 8th Armies where it remained until the end of the war. Returning to Egypt immediately after the war in May 1919, the Squadron was renumbered 208 Squadron on 1 February 1920.

No. 113 reformed at Upper Heyford on 18 May 1937 as a day bomber unit with (Hawker) Hinds. In April 1938 it left for the Middle East, converting to (Bristol) Blenheims in June 1939. After Italy joined the war in June 1940, the Squadron carried out bombing raids on Italian bases in Libya before moving to Greece in March 1941. There it was overtaken by the German invasion and lost all its aircraft, the Squadrons personnel being evacuated to Crete and Egypt.

Bombing operations began in June 1941 but the after the outbreak of war in the Far East the Squadron was moved to Burma where it attacked Japanese columns until it was evacuated to Calcutta in March 1942.

From their main base in Asansol the majority of the strikes were made against targets in the Arakan and over into Southern Central Burma. The Squadron's anti shipping role was a very large effort (for the Burma theatre) and is worthy of note as it resulted in a large number of a/c and crews lost. No. 113 squaron continued to bomb Japanese communications and airfields until it converted to Hawker Hurricane IICs (4x20mm cannon) in March 1943. These were used for ground-attack duties being replaced by (US Republic P47) Thunderbolts in April 1945 which were flown until the Squadron was disbanded on 15 October 1945.