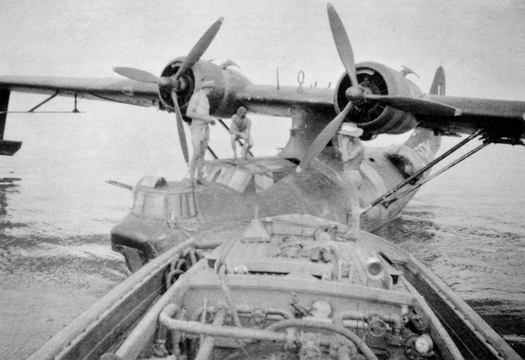 Information below an extract from the AWM page HERE (www.awm.gov.au)

20 Squadron was formed at Port Moresby in New Guinea on 1 August 1941. Equipped with the PBY Catalina and Empire flying boats, the unit's first task was to conduct extensive seaward patrols and clear three Japanese vessels from Australian waters.

The squadron resisted Japanese landing forces at Kavieng and Rabaul in late-January 1942 and maintained night bombing operations against these two targets throughout the year. Surprise Japanese-aircraft attacks on Port Moresby during March resulted in the loss of several Catalinas and the squadron was forced to relocate to Bowen in Queensland in May. For the remainder of 1942 the unit conducted seaward reconnaissance throughout the New Guinea area, the Solomons, and New Caledonia. Squadron crews were increasingly ordered to perform night attacks on enemy bases and in mid-1943 they mined enemy harbours and dropped supplies to Allied coastwatchers.

During 1943 the squadron made regular combined attacks across New Britain, in support of Allied plans to recapture the island. The following year, four aircraft were detached for operations from Manus Island. The rest of 20 Squadron continued with extensive mine-laying operations in the Caroline Islands, New Ireland, Surabaya, Manokwari, Kaimania, and Sorong.

On 2 September 1944 the squadron moved from Cairns to Darwin and for the next month flew sorties over Bangka Strait, the Celebes, and Java. Later in the year the unit helped mine Manila Harbour in preparation for the American advance on Mindanao. In 1945 missions were also flown to lay mines off the coast of China and drop and extract special agents behind enemy lines.

Following the end of the Second World War 20 squadron aircraft flew mercy missions through the South-West Pacific Area, delivering medicine and other supplies. From November 1945, with the squadron now based at Rathmines in New South Wales, missions were still being flown to Borneo, Manila, Port Moresby, and Singapore. 20 Squadron was disbanded on 27 March 1946.