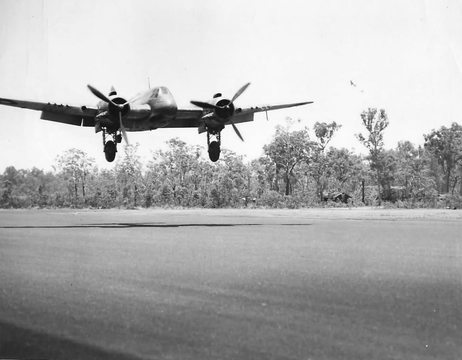 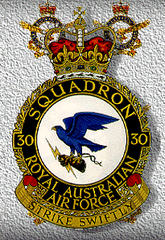 The 30 Squadron website (www.beaufighter30squadronraaf.com.au) is very comprehensive and therefore a brief summary of the unit's service is produced here.

No. 30 Squadron was established at RAAF Base Richmond on 9 March 1942 as a long-range fighter squadron and were equipped with the then new Bristol Beaufighter aircraft, which logistically shared much with the Beaufort light bomber.

After a brief period of training the squadron deployed to Townsville.  From RAAF Garbut and satellite fields it escorted anti-shipping patrols. In early September a small detachment from the squadron was sent to Milne Bay from where they attacked Japanese shipping, becoming the first RAAF Beaufighter squadron to see action.

The  squadron then deployed to Port Moresby in New Guinea from where it operated as a low-level ground attack unit supporting the Allied efforts in Papua, a role in which the Beaufighter proved highly successful thanks to peerless forward visibility for the pilot and heavy concentrated firepower in the nose of the aircraft.

No. 30 Squadron's primary mission during the war was strike and interdiction by attacking Japanese shipping and coastal bases, with the focus initially being upon targets around Buna and Sanananda.  Later support operations were carried out along the Kokoda Track, Goodenough Island and Lae.

In early 1943 the squadron took part in the Battle of the Bismarck Sea, one of the decisive maritime engagements in the SW Pacific.  It resulted in heavy losses for the Japanese who were trying to land troops to reinforce their positions on New Guinea's north coast.  The squadron's aircraft conducted low-level 'flak suppression' attacks on Japanese shipping, which thinking they were being subjected to a torpedo attack turned head on towards the incoming Beaufighters which raked their decks with cannon and MG fire while US aircraft medium bombers were then able to carry out beam attacks on the ships.

They later attacked a Japanese airbase around Lae, destroying a significant number of Japanese aircraft.

In July 1943, the squadron was moved to Goodenough Island, tasked with attacking Japanese airfields and searching for supply barges that were being moved along the coast between Madang and Nassau Bay. It also undertook convoy escort duties for Allied ships transiting the area.  No. 30 Squadron remained on the island until November, when the squadron was moved to Kiriwina.

In March 1944, the squadron became part of No. 77 Wing, along with Nos. 22 and 31 Squadrons.  It was then relocated to Tadji, from where it continued to interdict Japanese barge-borne supplies in the Aitape–Wewak region; these proved very successful and in October the squadron's arsenal was expanded to include air-to-ground rockets.

As part of the Australian First Tactical Air Force, No. 30 Squadron moved to Morotai in the Netherlands East Indies in November 1944 carrying out operations in the Celebes Sea and the islands of Ambon, Ceram and Halmahera. During this time, the squadron suffered a serious set back when it lost two aircraft destroyed and eight damaged in a Japanese night air raid; however, the losses were made up through either replacements or repairs and operations continued.

During 1945, No. 30 Squadron supported Australian operations in Borneo and in May it deployed to Tarakan, flying operations from that island in support of the Australian landing at Balikpapan. The squadron returned to Australia in December 1945 on board HMS Glory and was disbanded at Deniliquin, New South Wales, on 15 August 1946.