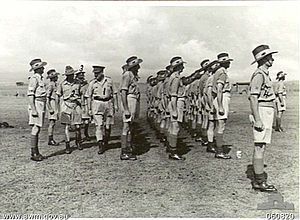 The 2/12th Field Ambulance was an Australian military unit of the Second Australian Imperial Force, serving during World War II. During their six years of service, over 200 soldiers were killed, the highest figure for a non-combatant unit in Australian history. The majority of the unit's casualties were suffered during the sinking of the hospital ship Centaur in May 1943. During the war, the 2/12th deployed personnel in support of Australian combat operations against the Japanese on Ambon, Timor and in Borneo before being disbanded in 1946.

They in turn were supported by unit stretcher bearers, generally drawn from the Battalion's Band.  These men would be trained to administer First Aid sufficient to clear airways, staunch bleeding and perhaps splint fractures so that casualties could be evacuated to the Battalion RAP.   Casualties would be hand carried - requiring at least four men but more like eight over any distance for each casualty.   When mass casualties occurred, such as through major shelling or an attack (by either side), decisions would have to be made about the priority of evacuation.   The RMO would assess the casualty and decide whether they were to be evacuated and with what priority.  Grievous wounds with little chance of survival would generally have a low priority when evacuation resources were scarce.

When an attack or advance was undertaken, the RAP would follow up the units' forward elements and were thus exposed to enemy direct fire (rifles and machine guns) and indirect fire (artillery and mortar fire ).

They would have to deploy forward to reach the RAP, and thus come under the same risks as the front-line combat troops.

They may have had a number of means to assist in casualty evacuation - generally motor vehicles.

Once at the CCS, additional Medical Officers and supporting personnel were available to carry out life-saving surgery.  Some casualties might be retained in a limited number of beds - generally to allow more seriously wounded to be evacuated further to rear.

From a CCS casualties would generally be taken to a Field Hospital or straight to a General Hospital.

This of course was dependant on a range of factors including terrain and the nature of the enemy threat of interdiction etc.  Papua New Guinea was about the worst type of terrain precluding motor transport in most cases.  Seaborn evacuation was also subject to interdiction as was the case with the Hospital Ship 'Centaur', torpedoed off the Queensland coast in 1943.