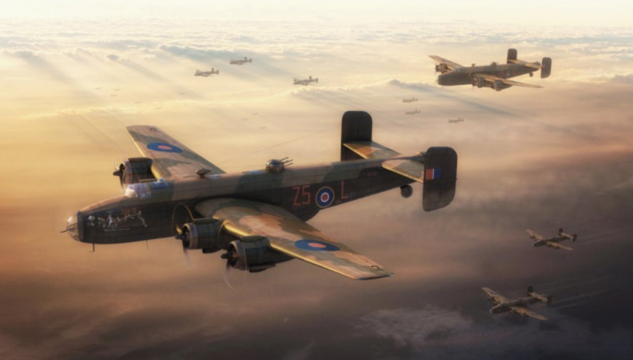 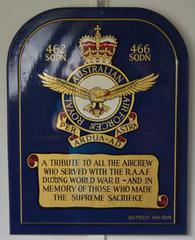 No. 462 Squadron was a RAAF "Article XV" squadron that was formed and served as part of RAF Middle East Command before relocating to the UK and Bomber Command during WW2.  Article XV referred to Empire Air Training Scheme that was to provide aircrew for the RAF to deal with the onslaught of Germany and the Luftwaffe.

It was originally formed in Egypt in September 1942 from detachments of Nos 10 and 76 Squadrons of the Royal Air Force.  Any notion that it was an Australian Squadron was rather fanciful becasue of the paucity of Australian air and ground crew.  It operated Handley Page Halifax heavy bombers.  The manner in which the squadron was raised and manned, meant that very few Australians were to serve with the Unit.

Equipped with Halifax bombers, the Unit operated against Rommel's forces in North Africa throughout 1943 and 44. During this period the RAAF endeavoured to have Australian representation raised in this nominal "RAAF" Squadron, but with little success. By August 1943, only a quarter of the Squadron's 600 personnel were RAAF members. As was often the case, it was apparent to the RAAF that the RAF was using the establishment to enhance posting and command opportunities for its own personnel, so Australia requested that No 462 Squadron revert to the RAF.  In due course, on 3 March 1944, RAAF No 462 Squadron was redesignated No 614 Squadron, RAF.

Five months later No 462 Squadron (RAAF) reformed at RAF Driffield, Yorkshire in England - and this time around the unit was allocated a much greater proportion of Australian personnel.  In its new incarnation the squadron had an Australian commanding officer and a higher proportion of its personnel were Australians.  Many of its initial personnel were transferred from No. 466 Squadron RAAF, then also at Driffield.  The squadron's first badge reflected this provenance.

Again equipped with Halifaxes, this time  B.Mk.III bombers, the Squadron participated in day and night attacks against German industrial cities, while at the same time, supporting the Allied ground forces fighting their way across France. No. 462 Squadron flew its first operational mission on 25 August and subsequently took part in attacks against 39 different targets over the next four months in support of Allied ground forces in Western Europe.

On 27 December 1944 No. 462 Squadron was relocated to RAF Foulsham in Norfolk and became part of No. 100 Group RAF. This Group specialised in electronic warfare (EW) and No. 462 Squadron's aircraft were modified to radar jamming equipment and other countermeasures.  Other RAF 'Special Duties' Squadrons were located at RAF Foulsham as part of the Group including No. 193 Squadron RAF.  Until the end of the war the squadron used its special equipment and mounted small diversionary attacks to deceive the Germans as to the location of the raids conducted by Bomber Command.

No. 462 Squadron continued to operate until almost the end of the war in Europe, and was the only Australian squadron in Bomber Command to both fly a higher number of sorties in April 1945 than March or to operate into May. The squadron flew its final operation of the war on the night of 2/3 May.

Despite their intensive operations operating active as well as passive countermeasures (Active transmissions could be detected located ad tracked by the enemy) the Australian Halifaxes - protected by their own countermeasures - suffered relatively light losses during 1945.  462's aircraft carried passive EW equipment suchs as 'Window' (foil strips cut to match enemt radar wavelength that created decoy radar signatures), active Electonic Counter Measures such as 'Airborne Cigar or ABC (see 100 Squadron RAF) which exposed the aircraft to a greater risk of detection, and another device, a radar jammer called 'Carpet' which jammed airborne interception radar and thus protected the aircraft.  It was also fitted with a night fighter early warning device called 'Monica' mounted below the tail turret.  However this device could be detected further away by enemy night fighters than Monica could detect them, and also gave off a lot of false alarms, so crews tended not to use it.

No 462 Squadron disbanded at RAF Foulsham in Norfolk on 24 September 1945, having been be used to test radio countermeasure equipment and techniques.  As a result, the squadron continued to fly training and ferry flights and also conducted armed patrols over Germany until immediately prior to disbandment.

These days No. 462 has been re-raised as the RAAF's defensive cyber-warfare unit, charged with ensuring that in the complex '5th Generation Network' environment, RAAF's complex systems can operate free of cyber inteference / interdiction threats.