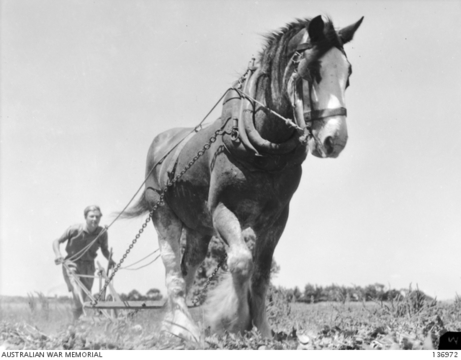 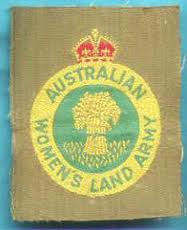 The Australian Women’s Land Army (AWLA) was formed during the Second World War to combat rising labour shortages in the farming sector. From December 1941, when Japan entered the war, the nation’s need to build up its armed forces was placed above the needs of other industries. Agricultural labour was steadily diverted to the armed services and war industry.

To meet the shortfall in rural labour, State and private women’s land organisations were organised, modelled on those established in Great Britain during the First and Second World Wars. A national body was formed on 27 July 1942 under the jurisdiction of the Director General of Manpower. While policy was devised by the Commonwealth Government, the organisation of the AWLA remained State-based. An extensive recruiting campaign was undertaken for new members. Most members of the existing land armies were later incorporated into the AWLA as well.

The AWLA was planned to function in two divisions:

Full-time members: These enrolled for continuous service for 12 months (with the option of renewal); such members were to receive appropriate badges, distinctive dress uniform, working clothes, and equipment.
Auxiliary members: These were available for periods of not less than four weeks at nominated times of the year; such members were to be used for seasonal rural operations, and to receive a badge, working clothes, and essential equipment on loan.

Recruits had to be between 18 and 50 years of age and be British subjects or immigrants from Allied nations. Women on the land who were farmers, employees or relatives of land holders were not eligible to enlist. AWLA women were generally drawn from city areas and were often unskilled in rural work. This new form of labour had to be heavily promoted to rural employees, who were initially resistant to female labour. Sceptical attitudes, however, generally changed to praise and respect.

Enrolment numbers peaked in December 1943, with 2,382 permanent members and 1,039 auxiliary members. The average working week for an AWLA member was 48 hours, with pay starting at the AWLA minimum wage of 30 shillings a week. Permanent members were also entitled to sick pay. Women were paid much less than their male counterparts for the same work, which covered a variety of agricultural labours, such as vegetable and fruit growing, pig and poultry raising, and sheep and wool work.

In October 1942 the Minister for Labour and National Service, aware of the need to compete with the three women’s services, recommended improving the status of the AWLA by instituting it as a fourth service. In January 1943 Cabinet endorsed the status of both divisions of the AWLA as an "official fourth service". The organisation was to be formally constituted under the National Security Regulations. A final draft of these regulations, however, was not completed until 1945, and was not acted upon before the end of the war and the demobilisation of the AWLA. As a result, members of the AWLA were not accorded the same benefits as members of the other women’s services.

The AWLA was disbanded on 31 December 1945. In 1997, many members became eligible for the Civilian Service Medal, after a Committee of Enquiry recommendation in 1994.