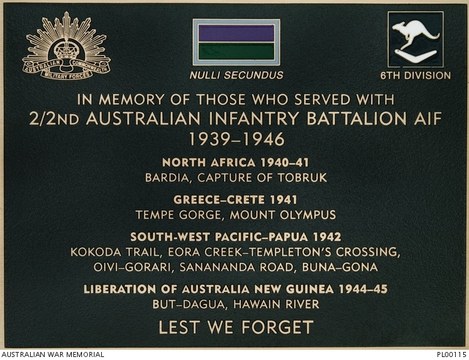 The 2nd/2nd Battalion was raised at Victoria Barracks, Sydney on 24 October 1939 as part of the 16th Brigade of the 6th Australian Division. It relocated to the newly-opened Ingleburn Camp on 2 November and, after conducting basic training there, sailed for overseas service on 10 January 1940. After disembarking in Egypt on 13 February 1940, the 2nd/2nd trained with the rest of the 16th Brigade in Palestine until the end of August. It then moved to Egypt to carry out its final preparations for operations with the 6th Division.

The 2nd/2nd Battalion's first campaign of the Second World War was the advance from Egypt into eastern Libya in January and February 1941. It was involved in the attacks to capture Bardia (3-5 January) and Tobruk (21-22 January), and remained as part of the Tobruk garrison when the advance continued. The 2nd/2nd left Tobruk on 7 March, ultimately bound for Greece.

Arriving in Greece on 22 March, the 2nd/2nd was soon deployed north to resist the anticipated German invasion. It occupied positions at Veria on 7 April, but a succession of withdrawals by the Allies in Greece meant that the battalion did not meet the enemy in battle until 18 April - at Tempe (Pinios) Gorge. There, in a desperate fight, the 2nd/2nd blocked German movement through the gorge to permit the safe withdrawal of Allied forces further south. It held its ground until overwhelmed by vastly superior German forces. Some parties from the battalion later managed to rejoin the main withdrawal south, and were eventually evacuated by the Allied navies, while others made epic escapes through the Greek islands. A group of 189 members of the 2nd/2nd subsequently fought with the 16th Brigade Composite Battalion on Crete.

After being rebuilt in Palestine, the 2nd/2nd manned defences in northern Syria between October 1941 and January 1942. It left the Middle East, heading for the war against Japan, on 11 March 1942. The 16th and 17th Brigades, however, were diverted on the voyage home. Between 27 March and 13 July they defended Ceylon (current-day Sri Lanka) from possible Japanese attack. The 2nd/2nd finally disembarked in Australia, at Melbourne, on 4 August 1942.

The 2/2nd's first campaign against the Japanese was the advance along the Kokoda Trail to the Japanese beachheads between September and December 1942. Fighting major engagements at Templeton's Crossing (20 October), Oivi (5-12 November), and on the Sanananda Track (21 November-10 December), the battalion suffered heavily from both wounds and sickness. It arrived in Port Moresby on 21 September 670 strong, but withdrew from the Sanananda Track with only 88 men. 1943 and 1944 were spent training in northern Queensland, and the 2nd/2nd's last campaign of the war was the drive to clear the Japanese from the Aitape-Wewak region of New Guinea between December 1944 and August 1945. For his actions at Dagua during these operations, Lieutenant Albert Chowne was posthumously awarded the Victoria Cross.

The 2nd/2nd Battalion disbanded in Brisbane on 15 February 1946.