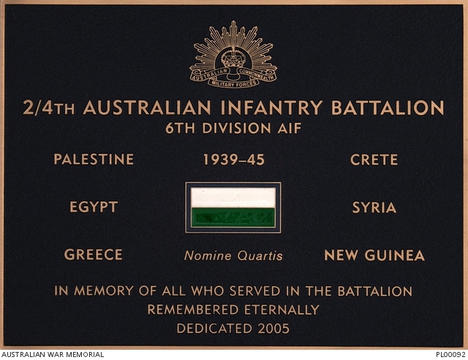 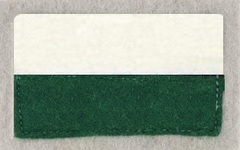 The VWMA uses the protocol '2nd/' when describing units of the 2nd AIF because that is how their titles were enunciated, and it avoids confusion with other designations '2/' applied to many units in many armies.

Following the outbreak of War in September 1939, the Australian Government legislated for the creation of a force to deploy overseas.  It became known as the 2nd AIF, distinguishing it from its WW1 antecedents, and the Militia forces that, initially at least, remained in Australia.

The 2nd/4th Battalion's first drafts of recruits arrived at Ingleburn Camp on 3 November 1939, following the formation of its headquarters at Victoria Barracks in Sydney the previous week. It was to form part of the 16th Brigade of the 6th Australian Division, and the battalion departed Sydney for service overseas on 10 January 1940.

While the battalion was en route for the Middle East Australian infantry brigades were reorganised along British lines, with three battalions instead of four (just as had happened in WW1! This meant the 2/4th was eventually transferred to the 19th Brigade, but remained part of the 6th Division.

Arriving in the Middle East on 14 February 1940, the 2nd/4th trained in Palestine and Egypt in preparation for its first campaign, against the Italians in eastern Libya. It played only a small role at Bardia (3-5 January 1941) but was more active during the battle for Tobruk (21-22 January 1941), and had to fight particularly hard to secure the Wadi Derna (26-30 January). It was the first Australian unit to enter Benghazi, on 6 February, and subsequently garrisoned the town until 22 February.

In early April 1941, the 2nd/4th, with the rest of the 6th Division, deployed to Greece to resist the anticipated German invasion. It fought a fierce battle at Vevi in northern Greece on 11 and 12 April and then withdrew through a series of rearguard positions until evacuated, by sea, from Megara on 26 April. The battalion landed on Crete the next day and eventually joined the force defending Heraklion airfield. When German paratroops landed on 20 May they were rapidly overcome by  the Allies in the area immediately around the airfield. The paratroops were, however, able to gain a foothold outside the defended area. This, combined with German successes elsewhere on Crete, brought about the 'flanking' of Heraklion, necessitating the evacuation of its garrison by sea on 29 May, under unremitting air attack.

After a period of training in Palestine, the 2nd/4th joined the force garrisoning Syria. It completed this duty in mid-January 1942, embarked for home on 12 February, and arrived at Adelaide on 27 March.

In June, the 19th Brigade was deployed to defend Darwin and the 2nd/4th remained there for what became a boring and frustrating year. The brigade rejoined the rest of the 6th Division training in northern Queensland in June 1943 but another 18 months would pass before it saw action again.

The 2nd/4th landed at Aitape in New Guinea on 2 November 1944 to undertake its only campaign against the Japanese. Its most intense effort took place between April and July. Landed at But, the battalion advanced along the coast, captured Wewak on 10 May, and then swung inland to clear the foothills of the Prince Alexander Range. For his actions during the attack on Wirui Mission on 14 May, Private Edward Kenna was awarded the Victoria Cross.

Following the Japanese surrender on 15 August, drafts of 2nd/4th men began returning to Australia for discharge. The remainder of the battalion itself arrived home on 26 October and disbanded at Chermside in Queensland on 12 November 1945.