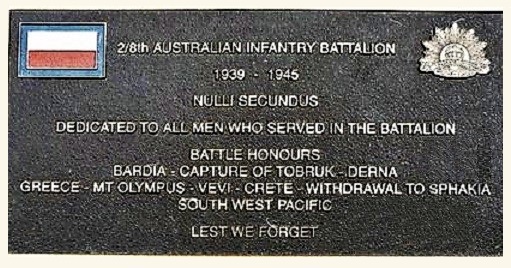 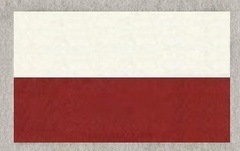 The headquarters of the 2/8th Battalion opened at the Royal Melbourne Showgrounds on 30 October 1939 and four days later relocated to the newly-established camp at Puckapunyal. After completing its basic training, the battalion departed Melbourne for service overseas on 14 April 1940. The battalion was originally formed as part of the 17th Brigade of the 6th Australian Division, but in February it was decided to reorganise Australian infantry brigades along British lines, with three battalions instead of four per Brigade. This meant the 2/8th was eventually transferred to the 19th Brigade, but remained part of the 6th Division.

Arriving in the Middle East on 18 May 1940, the 2/8th trained in Palestine and Egypt in preparation for its first campaign, against the Italians in eastern Libya. It played only a small role at Bardia (3-5 January 1941) but suffered the heaviest casualties of any Australian unit during the battle for Tobruk (21-22 January 1941), after having to attack a strong point constructed around a line of dug-in tanks. The 19th Brigade led the divisional advance onwards to Benghazi, which was reached on 6 February; the Italian forces surrendered the next day.

In early April 1941 the 2/8th deployed to Greece. It fought a fierce battle with German troops at Vevi in the country's north on 11 and 12 April but, overstretched and assailed by a vastly superior force, was forced to withdraw. The battalion became disorganised, lost a great deal of its weapons and equipment, and many of its troops were separated. It played no significant role in the rest of the campaign and was evacuated from Kalamata, in two ships, on the night of 26 April. 199 members of the battalion were taken straight back to Egypt, while another 394 were landed on Crete after their transport, "Costa Rica", was sunk. This party fought around Canea after the landing of German paratroops on 20 May.

The battalion was reunited in Palestine on 3 June and in October it joined the force garrisoning Syria. It left Syria in mid January 1942, embarked for home on 12 February, and arrived at Adelaide on 28 March. In June, the 19th Brigade was deployed to defend Darwin and the 2/8th remained there for what became a boring and frustrating year. The brigade rejoined the rest of the 6th Division training in northern Queensland in June 1943 but another 18 months would pass before it saw action again.

The 2/8th landed at Aitape in New Guinea on 12 November 1944 to undertake its only campaign against the Japanese. It was involved in the Danmap River operations between December 1944 and February 1945, and then the advance on Wewak and clearance of the Prince Alexander Range between April and July 1945. The capture of the dominating heights of Mount Shiburangu on 27 June was the battalion's greatest achievement of the campaign.

Following the Japanese surrender on 15 August, drafts of 2/8th men began returning to Australia for discharge. The remainder of the battalion departed Wewak on 10 November, and disbanded at Puckapunyal on 14 December 1945.